The Marple Band on Radio 2

The Marple Band on Radio 2

A 1996 cassette recording resurfaces 26 years on

Every now and then something unusual is donated to Marple Local History Society Archives.

In this case, former Marple Librarian Margaret Bradbury was downsizing early in 2022 and came across a cassette tape that she'd had for a very long time. It was a recording that Margaret made way back in 1996 featuring The Marple Band on the radio and she decided to pass it onto the society.

The initial problem was finding someone who could play it at all, so Chairman Hilary Atkinson asked Mark Whittaker of the Marple Website to see what he could do to help.

Mark didn't have a cassette player either but discovered he could purchase a modern USB cassette to digital converter for a reasonably small investment. This worked remarkably well, and the challenge became how to get proper permission to share an original Radio 2 broadcast online.

Mark wrote to the BBC to explain what we'd found and asked for permission to use the recording. This took a couple of weeks to fine-tune but the BBC Archive Researcher was very helpful throughout the process and a license to use BBC Archive Content was agreed. The licence made it clear that permission has been obtained from the BBC to share the programme with visitors to The Marple Website but with certain conditions and the programme remains Copyright © BBC.

Those conditions include that a full list of tracks is featured; that a link to the web site Contact Page is included so people can get in touch if they are unhappy about the programme being used; and that a note clarifying that this is archive material and the announcement at the end is not current.

Listen to the Band on BBC Radio 2

This episode of the programme "Listen to the Band" with Frank Renton was broadcast on Friday 17 May 1996 at 9.30pm on BBC Radio 2. It is described in the BBC's archive as "Frank Renton introduces a session from the The Marple Band, conducted by Garry Cutt".

It features the following music tracks:

The 1996 recording is in MP4 format and should open in a new browser window for you to play. It is 30 minutes long and of course the announcement at the end is not current. 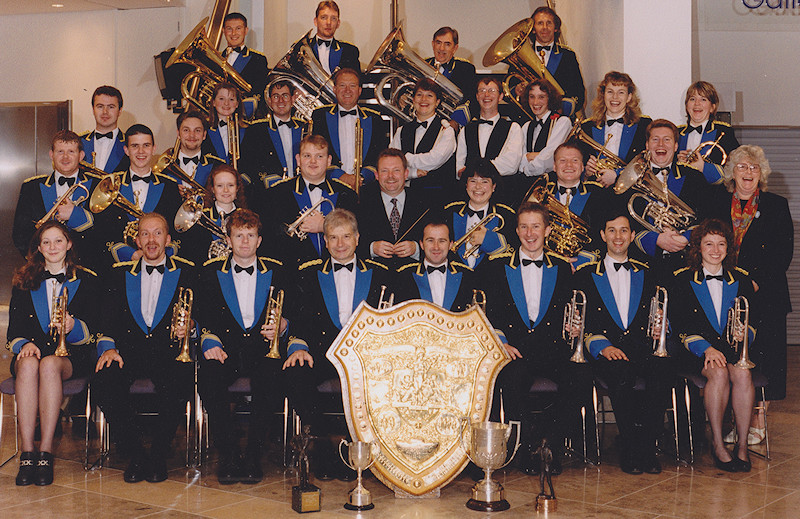 The Marple Band in the Bridgewater Hall, the day after becoming British Open Champions

There is one very important thing about this recording, it was made in the spring of 1996 a very big year for the band…

Many banding people will still remember The Marple Band becoming the ‘144th British Open Champions’ in September 1996, at the newly opened Bridgewater Hall in Manchester.

This being known as the most difficult band contest to win, having 22 of the best bands in Britain which have been competing since 1853. Many of these top bands enjoyed large commercial sponsorship deals compared to The Marple Band being supported by its home community, performing concerts and other engagements to raise funds.

The band worked really hard to survive and progress at this very competitive level. Ten band contests were entered in 1988 and they won seven of them… other bandsmen often made sure they listened to Marple as they were the band to beat, and later the top bands were starting to look over their shoulder too.

The band qualified to play its first British Open contest in 1990 and had three consecutive fourth places in 92, 93 and 94… the big name bands were now beginning to take Marple seriously. Becoming the British Open Champions in 1996 was hard earned and very well deserved.

Going back to the BBC recording, the opening March ‘Honest Toil’ reflects the above very well and became the title of the bands victory CD recording, made soon after the Open which included the actual winning performance of Elgar’s ‘The Severn Suite’.