It's over 20 years since I was contacted about the Shutters from Marple Hall as a result of the history articles about the hall on the web site. There have been quite a few discoveries in the intervening years but nothing new for quite some time. So it was very exciting to receive a message from Stockport based Builder and Property Developer Allan Walker just a few days ago (April 2020):

I’m currently renovating a property in Romiley. Many of the locals and a former owner's grandson have all said the front door came from Marple Hall. It’s a beautiful door that we will be retaining. I just wondered if you would be interested in its location as I noticed it was with the Stained Glass (that you have written about). Allan Walker, A R Building Solutions. 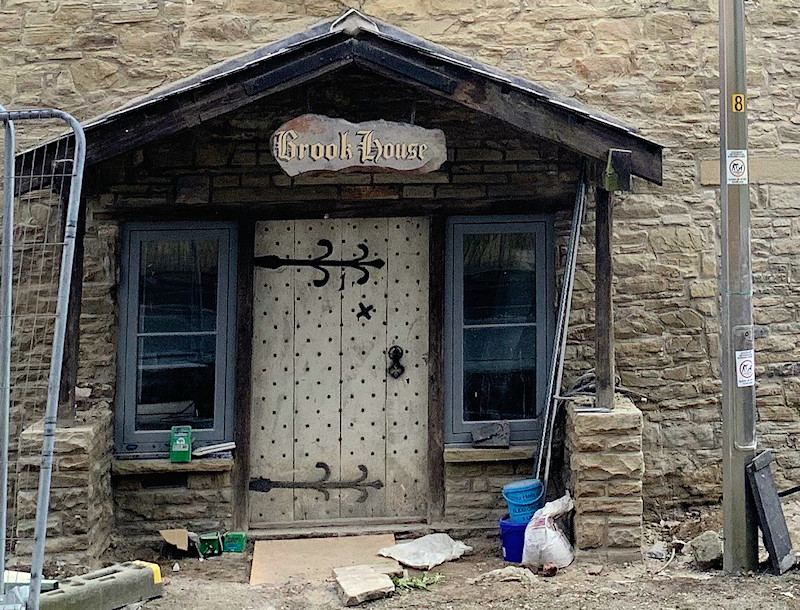 Allan and I quicky exchanged several photographs and after comparing the door to old images of the hall, and also an old watercolour painting of the entrance hall provided by Marmaduke Alderson (custodian of Charles Bellairs' Journal) we were soon pretty sure that we'd confimed its authenticity. 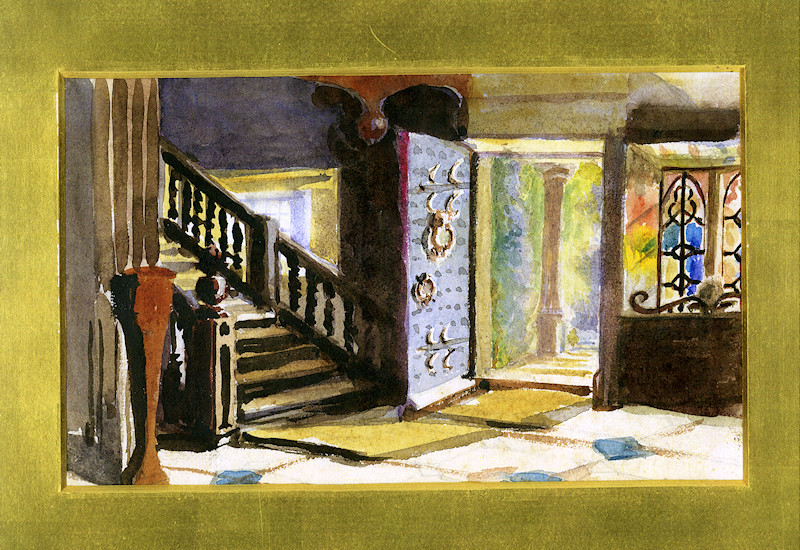 Initially we thought it was the front door, possibly cut-down in size, but after examining old photos of the hall's main entrance more closely, we realised something wasn't quite right. Despite amazing similarities, especially the hand-made hinges and studding, zooming in showed that Allan's door was hung on the opposite side, the planking, door furniture and numbers of studs were also different. 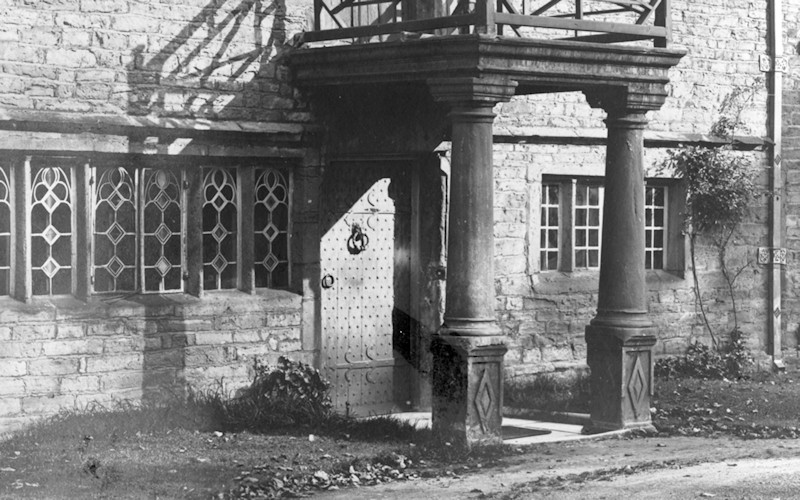 The front door on Marple Hall in close-up

Although investigations showed it wasn't the elusive front door, both Allan and I were now convinced that his door must have originally come from the hall. You didn't just nip down to B&Q in the 1650s, everything was hand-made by craftsmen in those days and it was clear to us that they shared the same provenance. Local legend that the door came from the hall was also confirmed by relatives of former owners when Allan shared details of his project on The Village Romiley Facebook group:

My grandparents moved in after they married in 1949, and converted it into one house in the 1960s. The front door, and the old kitchen door, he got from Marple Hall when it was demolished. He also put in the beams but I don’t know where they came from. Madelaine Eades.

Of course there must have been many doors at the hall in its heyday but the similarities suggested a strong link between the two. If it wasn't the front door, could it be from the back, or an outbuilding? I began a trawl through all the old photos of Marple Hall collected over many years on the Marple Website's Virtual History Tour to see if any other doors could be spotted. There are far fewer photos of the rear view of the hall than the frontal view we're all familar with, so I focused on these. 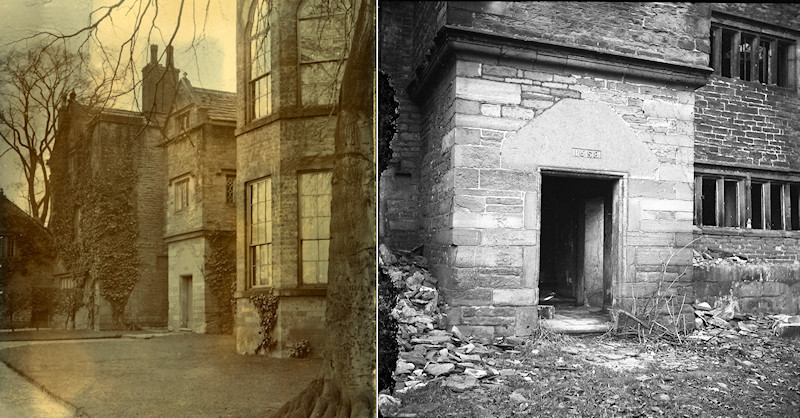 The rear of Marple Hall, where the 1658 date stone was located

Sure enough, zooming into the large scan of the image above left, one of the best we have of the back of the hall, gave a tantilising glimpse of similar studs and a matching hinge hung on the correct side. The most exciting thing about this discovery was that the date stone still exists on the site of the hall. Also, as can be seen in the 1958 image (above right) taken after the door had been removed almost exactly 300 years later, the door framing is carved into the stone. 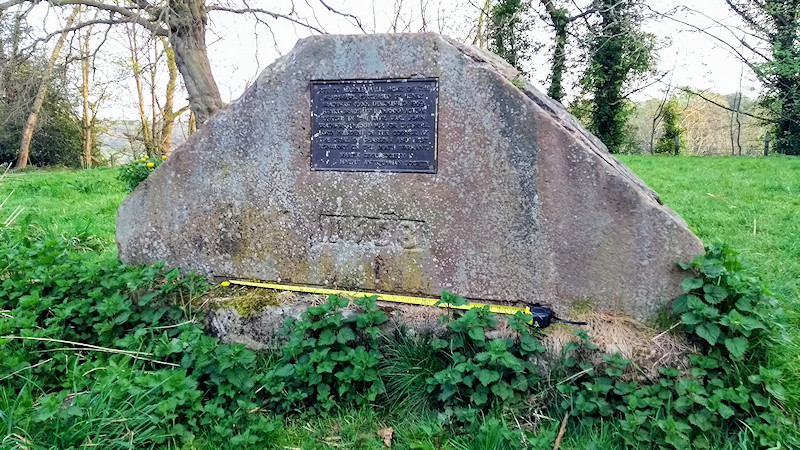 The date stone on the site of Marple Hall today, with tape set at 1100mm

This was a great opportunity to gather real physical evidence of a link. So armed with a tape and the width of the door measured by Allan, I headed for the Marple Hall site (on my permitted early morning exercise during the Covid19 crisis) to check. I'm delighted to report that the 1100mm width of Allan's door would have been an absolutely perfect fit in the stone frame at the rear of Marple Hall!

Although some my not consider this as proved beyond a shadow of a doubt, I'm convinced that the door on the property at 1 Padden Brook is the one from the rear entrance of Marple Hall. For any doubters amongst you, take a look here at just how well it fits: 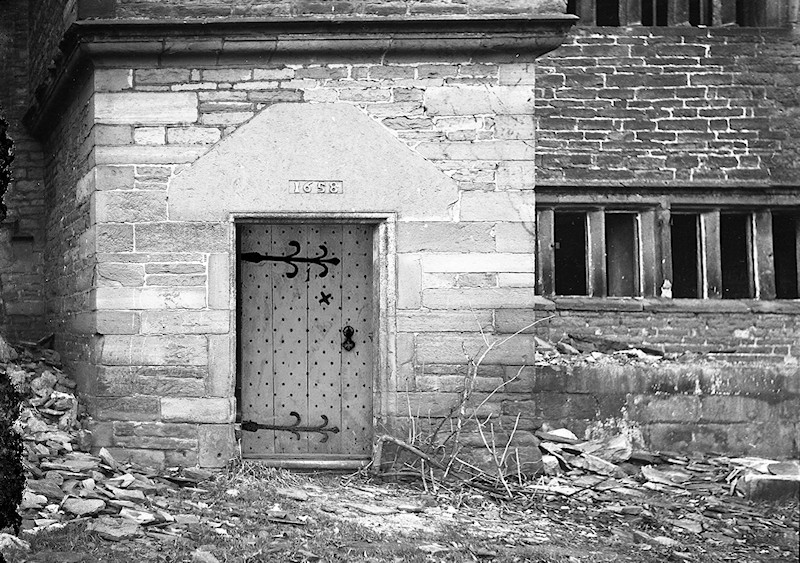 A great fit, but what do you think?

I must thank Allan for sharing the details of the fantastic door on his property. Unfortunately due to the Covid19 restrictions at the time of writing I've been unable to visit with my camera and take a closer look but I hope to be able to do that at some point in the future. I also hope that future owners, whoever they may be, will respect the history of the door like Allan and keep it exactly as it is now. Of course if it's ever decided to remove it from the property I'd love the opportunity for first refusal to resite it in a public building closer to home, so its Marple heritage can be shared with all!