This article written by the late Audrey Featherstone was discovered in the archives of Marple Local History in a folder about the Carver family. Nobody at MLHS is sure when Audrey wrote it but following her death in 2005 it was agreed that it would be a nice tribute to her to publish it on The Marple Website. Audrey was a retired librarian with a fascination for research and archiving. She worked very hard at organising the history society’s archives, including teaching herself how to use a computer, and led a small team that indexed the archives of the Marple Urban District Council. She was always the first to volunteer for any task and would help anyone. I experienced this myself when Audrey managed to find a newspaper article that identified a Compstall Rose Bowl I had purchased as originally being presented as a gift to a local MP in 1910. Audrey passed away quickly in December 2005. The day before she had been shopping at a collector’s fair with a fellow history enthusiast, Kirsten Western, so she was doing the things she loved right up to the end. 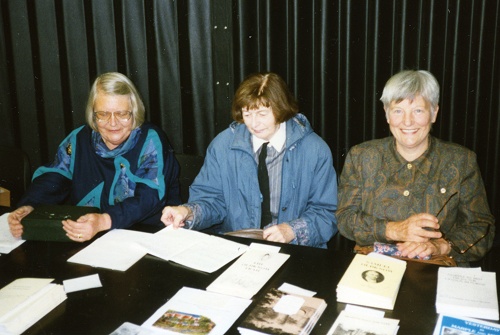 Field Marshall Montgomery is not a name usually connected with Marple local history. But the Carver name most certainly is, and it is here where the connection lies. Oswald Carver was the eldest child of Thomas Carver who bought the Hollins Mill in 1859. At the age of 19 he entered into the mill management and eventually married, living in Marple with his wife and five children. In 1902 the family moved to Cranage Hall, near Holmes Chapel, and Oswald became more involved with the Manchester side of the business. 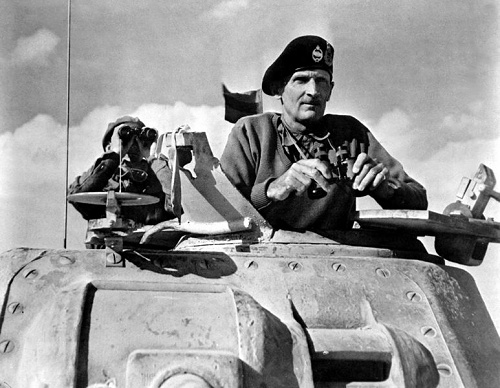 Alison Carver was one of Oswald's children and had been sent to a finishing school in Switzerland to complete her education. Here she became very friendly with a Betty Hobart, a girl born of Irish parenthood, also sent to the Swiss finishing school. In due course, Betty received an invitation to stay with the Carvers at their country home in Cheshire and was introduced to Alison's four brothers. One of the brothers was Waldo Carver and he and Betty fell deeply in love. This did not go down well with Betty's parents! Although the Carvers were extremely wealthy cotton-mill owners, the Hobarts felt Betty would demean them by marrying into 'trade'. After an enormous marriage settlement Betty's father finally gave his consent, and the couple were married in 1910. The pair were blissfully happy, together with their two young sons and then came tragedy! During the 1914-18 Great War, after only five years of marriage, Waldo was killed at Gallipoli. Betty was totally grief-stricken and it took years to get over her loss. At first she lived with her mother-in-law in Cheshire, but they did not get on well together and, feeling trapped, Betty decided to move to London where her brother lived, together with her two sons John and Dick. In London she immersed herself in war work and after the war she enrolled at The Slade School of Art. Having always been interested in art and sculpture, she excelled in oil and watercolour painting. 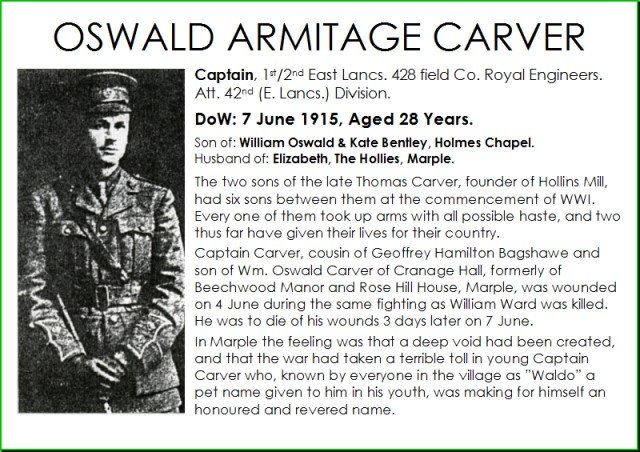 Living in Chiswick, Betty and her sons would take their holidays in Cornwall, where she started painting seriously. During the Christmas holidays in 1925 Bernard Montgomery met Betty Carver and her two sons for the first time and felt immediately at ease with the family. Montgomery was an austere, eccentric person passionate about his career in the British Army, and old before his time. His childhood had been Spartan and unhappy, ruled over by his domineering mother - only in the Army could he escape her spell - and love was an unknown word in the first 35 years of his life. Desperately wanting to appear 'normal' he did propose to a young girl, Betty Anderson, but she turned him down and he retreated back into his Army shell. But Betty Carver was a revelation to Monty. Befriending the family on holiday, he had an excellent relationship with the boys and soon became deeply attached to their lively, bohemian mother. An attraction of opposites perhaps, but one that held a promising future. A holiday in Lenk for the skiing finally set a seal upon the friendship and, by 1927, the couple were seeing each other so often that people began to gossip. Because of the gossip Betty suggested parting for a while and, at this, Monty told her he loved her and proposed. On June 25th 1927 the following announcement appeared in The Times:

Monty's family, colleagues and students were amazed to hear of the engagement, never having thought that he would ever marry. Estranged from his mother, Monty avoided telling her and he arranged for his Father (a bishop) to conduct the wedding service, with his brother Colin (a curate) assisting. It was to be held at the parish church of Chiswick, only doors away from Betty's house, and Monty's other brother Brian was to be the best man. On the morning of the wedding Monty drove Brian to Betty's house, where they went inside to check that everything was in order - Monty ever the perfectionist! It was a very quiet wedding, perhaps 25 guests in all and a traditional reception was deliberately excluded with the couple driving straight off after the ceremony. They drove to Church Stretton in Shropshire for a few days, played golf and in the evenings would read James Stephen's "Crock of Gold" to each other. Calling back to London to check that the boys were all right, Monty and Betty then continued their honeymoon where their romance had begun - back in Switzerland. 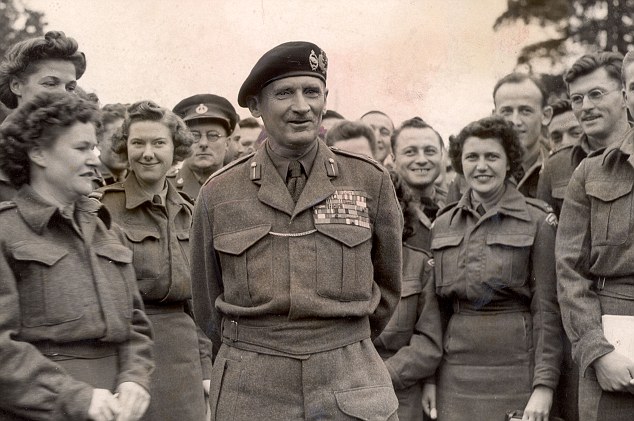 Betty's love for Monty was a very different love from the passionate love she had shared with Waldo, but it was no less important for that. It was deeper and richer through her experiences with life and death. Betty once wrote that a woman "is essentially the sensitive transparent globe into which man pours the riches of his originality", and this she most certainly was with Monty who loved her dearly. That this self-disciplined, contained man could fall in love was a tribute to her tenderness. Having lost her first husband after only five years of marriage and having had such a puritan childhood, Betty now found she had love, devotion and security together with a loyal companion with whom to share life. Monty, for his part, now had a wife who loved him deeply, who was encouraging, affectionate and tolerant - a far cry from the stress and pain of his Spartan childhood. For the first time in his life Monty experienced mutual love and affection and there was to follow an idyllic ten years of marriage. Betty, after twelve years of fending for herself, only to happy to let Monty take charge and organise her life whilst he, prematurely middle-aged, enjoyed the frivolity and zest for living that she encouraged him to partake. Betty's artistic, bohemian friends helped to extend Monty’s vision of life, enabling him to laugh at himself. Bossy though he was, Monty insisted that Betty had the freedom to paint and sculpt -he greatly admired her work, which was gaining in reputation.

In January 1928 the family once again travelled to Lenk in Switzerland to enjoy a skiing holiday. Betty was desperately sick on the channel crossing and it was then discovered that she was pregnant. Delighted that he was to become a father, Monty fussed over her like an old hen and their son David was born on August 18th 1928. By now Betty was in her early forties, having to watch her health and Monty was only too pleased to have the opportunity to spoil her. He organised a nanny for the baby and took care not to allow his stepsons to feel left out. Four months after the birth he took the boys again to Lenk, leaving Betty and the baby at home. The following years saw the cementing of their family life and the furtherance of Monty's career - life could not have been better for them. They travelled widely, going wherever Army life took them - Egypt, India and Palestine where Betty produced some of her finest watercolours. 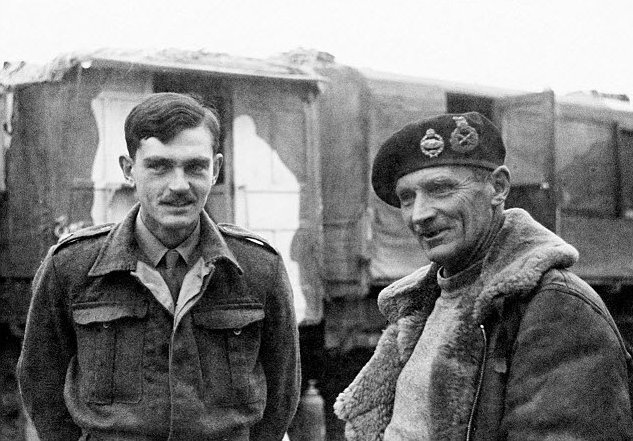 Richard Carver with his stepfather Montgomery in 1943

Then, into their happy, carefree family life, tragedy struck. It was now August 1937 and they were living in Portsmouth where Monty was enjoying promotion as a Brigade Commander. All was going well and a new house was about ready for the family. Whilst Monty was on manoeuvres on Salisbury Plain, Betty took nine-year old David to the seaside at Burnham-on-Sea. During their stay Betty was stung on the foot by some sort of insect and, by the evening, her leg had begun to swell. A doctor was called and she was admitted to the local cottage hospital. Monty was sent for as her condition was rapidly worsening, although at times there was improvement and she rallied. Perhaps no one realised the gravity of the sudden infection and eventually, in an attempt to stop the septicaemia, her leg was amputated. Monty was convinced she would recover, but the last-minute attempt of amputation to halt the spread of infection was useless. Although Betty survived the operation, she quickly developed pneumonia and died in Monty's arms as he read the 23rd psalm to her. For the last twenty-four hours of her life Monty never left Betty's side and, in a letter to Dick her younger son, he wrote that "the final end was very peaceful, just one deep sigh; and she had no pain the last few days. She knew me up to about one hour before she died." Monty was distraught and inconsolable at her death - the doctors had no idea of what had caused the blood poisoning and she had battled on over six weeks. His reaction, which no one in the family understood, was to exclude all friends and family from the funeral, which was totally private. Monty was the one witness at the graveside, accompanied by his chief of staff, staff captain and driver - none of whom had met Betty. She died on October 19th 1937, and was buried two days later in the cemetery at Burnham-on-Sea. Canon Dick Sheppard conducted the burial service and here there is another link to the Carvers of Marple. Well-known for his work as Vicar of St. Martin's in the Fields, London, Dick Sheppard was married to Alison Carver from Cranage Hall - the same Alison who had met Betty at finishing school and sister to Waldo Carver, Betty's first husband.

Monty's deep loneliness after Betty's death was reflected in a total dedication to soldiering and the winning of the next war. He had lost the most precious thing in his life.

If you have anything to share about Marple's history and heritage, including photos for the Virtual Tour, or if you would like to submit an article for publication on the site please get in touch using the contact page.