Memories of Marple with Barbara Hambleton

Barbara Hambleton talking in 1996 about her memories of Marple 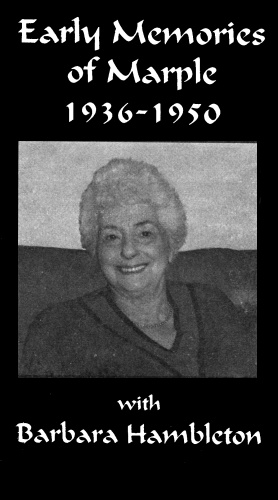 This is a video from Marple Local History Society's archives of Barbara Hambleton talking about her memories of Marple and Marple Bridge. It was recorded in 1996 by Gordon Mills and was converted from VHS tape to digital format by The Marple Website in March 2011. In February 2020 it has been uploaded to Youtube and migrated to the new website.

Thank you to Anne Frazer for technical help with the re-conversion of this video for uploading to Youtube.

Barbara moved from the centre of Manchester to Marple Bridge with her family in 1936 at the age of 17. She says she felt like a foreigner and a townie when she first arrived but seems to have settled fairly quickly. For a while she commuted to Manchester by train but later worked locally in the Council Offices in Memorial Park and remembers the inside of Hollins House being much as the Carvers left it.

Barbara recalls many happy memories including the 1937 coronation celebrations, posh dances at Marple Baths and "sneaking" off for her first visit to a pub with her future husband and their friends. She talks about how it was during the Second World War, with evacuations, black-outs and rationing and shopping in Marple at the posh end of Market Street where the shops were once covered by a veranda. She also recalls how different it was bringing up children without today's modern aids and remembers when there were only three lady drivers in Marple Bridge!

Barbara barely pauses for breath as she recounts 60 years of life in Marple Bridge: