The Rotary Club of New Mills, Marple and District meets every Thursday lunchtime in Mellor and Townscliffe Golf Club at 12.30 pm. 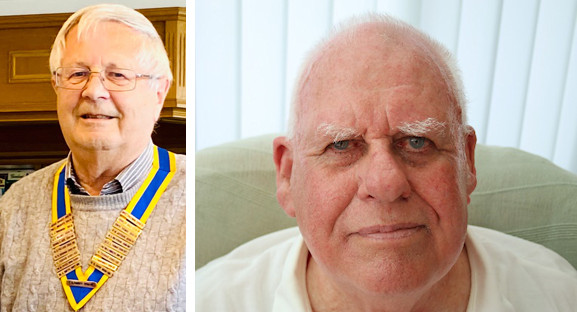 John graduated from Manchester University Dental School in 1968 and worked in General Practice until I retired in 2009.

He has been in Rotary for approximately 20 years having been in Whitefield and Hazel Grove clubs as he moved with work. He played Rugby for Old Bedians until his mid thirties then started running and joined Stockport Harriers. Over the following years he ran Marathons in London, New York, Munich and Figeac in France.

He still jogs regularly but now also does long walks in the Peak District, Lakes and North Wales.

He enjoys pottering in the garden and dog walking on a regular basis.

He was President of New Mills, Marple and District Rotary Club previously in 2009-2010 and has seen a gradual change both of members, as we now have lady members, as well as Friends of Rotary.

The current Secretary is yet another retired solicitor, having practiced for upward of 40 years in Manchester. Howard lived in Knutsford from 1971 and was a member of the Rotary Club of Knutsford for eighteen years before moving to Marple in 2015 and joining New Mills, Marple and District Rotary Club.

Check the club's entry in the Community Directory for contact details.