Last caretakers of the hall

We've long known that from the early 1920s Marple Hall was looked after by caretakers, and of course in 1929 there was that incredible but sad sale of the hall's contents by auction that led to the naming of Agatha Christie's Miss Marple. This scattering of its treasures was the start of the end for Marple Hall but it clung on for another quarter of a century being cared for by others.

An exact time-line of who the caretakers were has never been completely clear but it's likely that Frank Tunstall was the first, as we know he was there between 1923 and 1932. There are more than a dozen photos of Frank and his family during their time at the hall on the Virtual History Tour and he wrote a guided tour of the hall published when it was open for visitors.

Next was Harry Cotton, who updated and republished the guided tour in 1934. Based on that date it's likely that Harry picked up the baton directly from Frank but it had never been clear how long he stayed or if he was still there when the hall was abandoned to its fate by the Isherwoods in 1953.

The Last Caretakers of Marple Hall?

In May 2020 I was contacted out of the blue by octogenarian Ann Allan, who has shared information that sheds new light on the story and reveals the identity of the gentleman, and his wife, who were probably the last caretaker and housekeeper of Marple Hall. Here it is in Ann's own words:

My Uncle Fred used to be a caretaker at Marple Hall during the 40's 50's, I was born 1935 and used to visit the hall in the school holidays. I have a couple of post card photos digitised I can pass onto you.

Frederick Essex-Crosby (1887-1960) and his Wife Alteria Annie worked as Caretaker and Housekeeper during WW2 and a few years after. Fred’s sister Eleanor Mary Fenton (nee Essex-Crosby), her husband Ken, son Dennis and daughter Ann (me) had a few holidays during the war years, travelling by train from Hull. Fred retired and took the job at Marple.

Fred served in WW1 and later was a Master Baker in Hull for most of his working life, during WW2 troops were stationed either in or around Marple. Fred showed them how to setup Field Kitchen in the Marple Hall Kitchen gardens.

I remember having High tea one time as a treat with the family’s youngest son, cannot remember his name [Richard Isherwood]. I was about 8 years at the time. I had three or four wonderful holidays at Marple Hall with my Uncle Fred and his wife. The writing on the enclosed postcard of the hall is addressed to Nelly, that was the familiar name of my Mother Eleanor Mary Essex-Crosby.

Its likely that Fred took over from Harry Cotton at the start of WW2 and was probably the last as your website suggests they all vacated by 1953. I just remember it as a magical place from my childhood.

Fred and Alteria, the last caretakers of Marple Hall 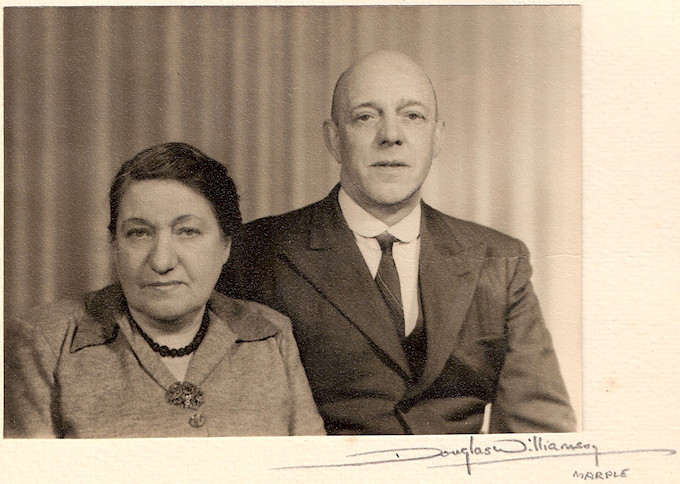 Front and back of the postcard to Nelly (Ann's mother Eleanor) 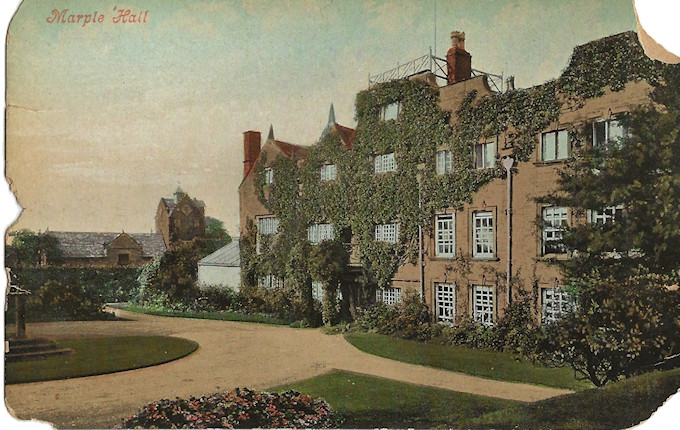 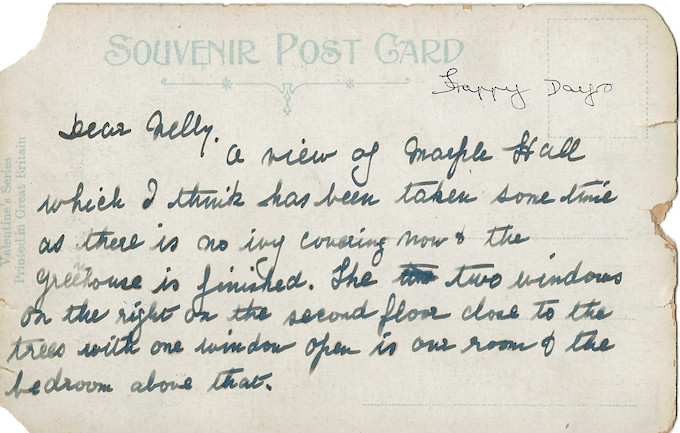 A view of Marple Hall, which I think has been taken some time as there is no ivy covering now and the greenhouse is finished. The two windows on the right on the second floor close to the trees with one window open is our room and the bedroom above that.

Thank you to Ann for sharing this little piece of family history that sheds extra light on the story of Marple Hall. If you have anything similar tucked away in a drawer please do get in touch.

Following publication of the above article Edmund Wilkinson, who played around Marple Hall as a youngster in the 1940s and 50s, has shared the following recollections about Caretaker Crosby.

I lived and was brought up Rose Hill in the 1940/50's and was very familiar with Marple Hall, the Park and surrounding woodlands. I can well remember caretaker Crosby, who was an anathema to us youngsters who were throwing sicks to knock conkers off the trees. In retrospect I am sure he was an excellent caretaker as he kept a very watchful eye on the hall, stables and their environs.

I recall he came from Hull, probably to escape the bombing there. Living conditions in the hall would not have been comfortable. He could often be seen walking from Marple carrying a can of paraffin for lighting purposes. Although the hall had been wired for electricity the generating plant in one of the stables was long defunct. He also snared rabbits for the pot.

I understand that during the war Richard Isherwood worked as a labourer for Townsend, Dan Bank Farm and stayed in the hall.

The stained glass, now in Bunbury Church was removed and stored in the small cellar for safety during the war and subsequently re- instated.

In 1953 a chimney stack collapsed and crashed down the main stairwell causing the Crosby's to vacate. They were the last caretakers. Thieves soon stole the lead down spouts and roofing channels and this was the beginning of the end although the building had not been maintained and was in poor condition. The side elevation overlooking the kitchen garden had substantial wooden props due to subsidence presumably.

The Crosby's moved into a council property in the Carver Road / Hibbert Lane area and associated themselves with The Congregational (URC) Church.