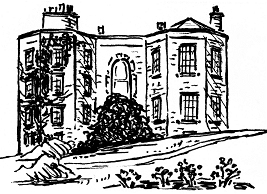 Samuel Oldknow came to this district in 1787 and remained for over 40 years, until his death at the age of 72. During this time he changed the face of Marple beyond all recognition, being the chief architect and driving force in the development and industrialisation of the area. Along with his mill at Mellor he was responsible for the building of roads, bridges, coal mines and housing for his workers. He was also instrumental in the construction of the Peak Forest Canal. A monument to him, placed in the Church he built to replace the old Chapel that had become too small for the expanding community, gives a clear indication of his standing and influence.

The free-standing tower in the grounds of All Saints' churchyard was once part of a Georgian Chapel, built to replace an earlier 16th century black and white timber-framed chapel that had blown down during a gale in 1804. Plans had been in place as early as 1803 to replace the old building, which was in a ruinous and dangerous condition, although work didn't start until 1808.