Friends of Memorial Park are delighted to announce that following this week's easing of Covid-19 restrictions, and after careful consideration by Stockport Council and contractor Canvas Spaces, Marple Skatepark Phase II construction works will start early next week commencing 18 May and last for approximately 6 weeks. 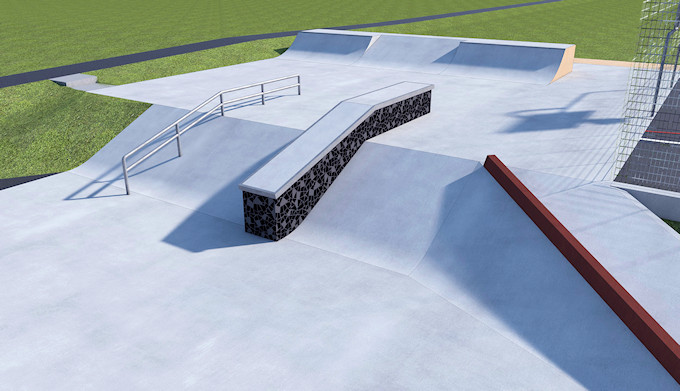 Refurbishment of the top section of the skatepark can go ahead now that plans and procedures for the delivery of the works have been revised to ensure measures are in place to reduce the risk of transmission of Covid-19.

As explained before our start in April was put on hold, activity will commence with a track being laid across the park for heavy traffic and access to the works compound, which will be on the basketball court like it was during phase I. The track will cause some obstruction to park users but is essential to protect tarmac and grass from damage by heavy machinery.

Under the current circumstances and restrictions the whole of the skatepark will remain closed.

At present exact timing of the follow-on works to refurbish the basketball court and turn it into a Multi-User-GAmes Facility is uncertain, primarily due to issues around material supply.

We will make further announcements whenever we have firm information to share with you.

Update: Marple Skatepark Phase II on hold due to COVID-19

We thought we'd overcome all the hurdles in the way of constructing Marple Skatepark Phase II but following the PM's announcement on Monday 23 March we can confirm that the construction start scheduled for 6 April is now on hold.

Stay safe, stay at home, save lives! We'll be back!

PS: If you read the footnote of the following article you'll see this was sort of anticipated. At least it's stopped raining for a bit!

Marple Skatepark Phase II start on site less than a month away!

Once again things have taken far longer than we'd hoped and expected but following a pre-start meeting with Canvas Spaces yesterday (10 March 2020), Friends of Memorial Park are now in a position to announce that Marple Skatepark Phase II construction will begin early next month.

Canvas will commence in April with a track being laid across the park for heavy traffic and access to their compound, which will be on the basketball court like it was during phase I. The track will cause some obstruction to park users but is essential to protect tarmac and grass from damage by heavy machinery. The basketball court and the old top section of the skatepark, plus the bank transitioning down, will be cordoned off with safety barriers during the works. Most of the lower section of the skatepark will remain open, so although work will be ongoing during the Easter school holidays, users will still be able to skate most of the lower level while the top section is being rebuilt.

After the top section of the skatepark is completed and Canvas have left site, a new contractor will follow-on with the works to resurface the basketball court, add fences and other new features to turn it into a modern MUGA (Multi-User GAmes) Facility.

The target is for all facilities to be reopened and the access track removed in good time for Marple Carnival on Saturday 20 June. Of course it will take longer for the grassed areas under the track to recover and for the flowerbed on the access route to be reinstated.

Please support Friends of the Park, Stockport Council and their contractors as we seek to complete the final stages of this long-term project begun in 2011 to create an outstanding new facility for the young people of Marple.

It's been a long time coming!

A potted history of phase II

It seems an incredibly long time ago now that we first revealed our ideas for the top section of the skatepark and the basketball court. It was actually during the Team Extreme event at the 2017 Marple Carnival, which celebrated the successful completion of the skatepark improvements that we'd been working towards since 2011.

A phase II wasn't initially envisaged but as we neared the end of the project it became clear that we wouldn't really be finished until the old top section was brought up to the same standard as the new part of the skatepark, and the basketball court had been way past its best for a very long time. Phase I had been a huge success, with fantastic community support, and we hoped to build on that and maintain momentum. 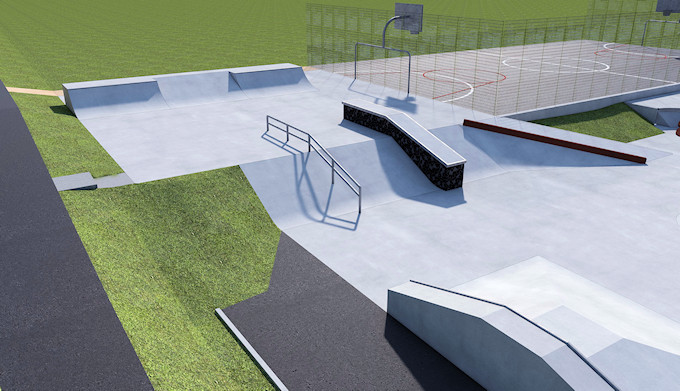 The reality has proved very different. Although we tabled provisional plans at Marple Carnival in June, it took until December 2017 to fully develop the scheme and submit a planning application. One of our key aims was to create a “nursery area” on the top section where young and less experienced users could skate and scoot when the park was really busy, yet was still fully integrated with the main skatepark. We think our design achieved this but unfortunately that aim had to be abandoned after objections were received on the plans that took until October 2018 to resolve.

At the root of those problems was a comment that “there would be no hard-standing access to the new sports area (existing basketball court)” once the improvements were completed. The planners decided that this needed to be addressed and the only way to provide it without restarting the planning process from scratch was to create a new footpath within the footprint covered by the existing planning application.

This meant that we would actually loose a 3 metre strip of usable space from the top section of the skatepark for a footpath we didn't really think was needed. The loss of this space meant that we no longer had enough room to create the “nursery area” and we had to make significant design changes and then resubmit to planning. This was done in July 2018 but approval dragged on until the October.

While all this was going on there was really good news on the financial front, as £85,000 of Formal Sports Commuted Sums from the Morris Homes development on Hibbert Lane was allocated by Stockport Council to pay for the skatepark phase II and MUGA works. 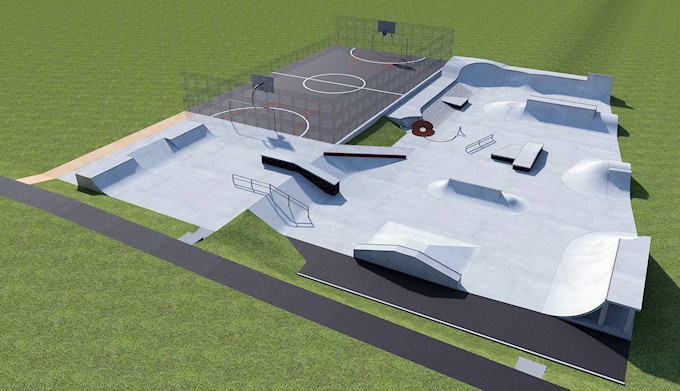 In the spring of 2019 we believed things were finally coming together: we had planning permission and we had the money, what else could go wrong?

Well one issue was an installation contractor who'd become very busy. We talked of starting before or after the 2019 summer holidays but it was very difficult to find a suitable window in Canvas's busy schedule. While this was going on we listened to some minor comments from users on the design for the top section refurbishment and decided to do something about them. This developed into a much bigger job than expected and we ended up reworking the layout over the summer so it had to be submitted to planning again! This went in at the end of August 2019 as a minor amendment to the scheme granted in October 2018. After another much longer than expected wait it was finally approved in October 2019 and we'd somehow lost another year!

The winter of 2019/20 has passed quickly with a prolonged engagement with Canvas, refining and adjusting costs and still trying to find a suitable window in their busy schedule.

As we enter the spring of 2020 it's great, at long last, to be able to make an announcement that we will be starting on site in April. As mentioned earlier, our target is to complete both skatepark and MUGA works in good time for Marple Carnival.

Can anything else go wrong? Will Coronavirus slow us down? Hopefully not but it would be much better if it stopped flipping raining for a few weeks!