An Extraordinary, Marple Area Committee meeting has been called for Wednesday, 2nd September, 2020 6.00pm. regarding the Temporary Withdrawal of the rail service on the on the Rose Hill Line. This will be a webcast remote meeting that can be watched live or on catch-up.

FoRHS Members are disappointed to report the following update.

William Wragg MP (Con Hazel Grove) very recently attended a meeting with Northern alongside Andrew Gwynne MP (Lab, Denton and Reddish), Jonathon Reynolds (Lab, Stalybridge and Hyde) and Cllr David Meller from Stockport MBC where they all put the strongest case against the temporary closure of the Rose Hill to Manchester via Hyde line, but unfortunately, as it stands Northern were unable to reverse this decision.

William is in close contact with the Rail Minister to bring pressure to bear and continue to campaign against this proposed closure.

The closure of the line is scheduled from Monday 14 September until Monday 14 December 2020 with alternative travel options including a shuttle bus service Mondays to Saturdays linking Rose Hill, Marple and Romiley stations. In addition the shuttle bus will also serve Woodley during peak times in the morning and afternoons for schoolchildren.

We have not given up the fight yet and are reviewing our options but you can also help by signing one of the following petitions, if you have not already done so.

Rail user groups from Rose Hill, Marple and Romiley are fighting plans to suspend train services on the route from Rose Hill Marple to Manchester Piccadilly via Hyde in the period September to December 2020. Northern Trains now run by the Department for Transport’s Operator of Last Resort, has told local MPs that they are planning to suspend all train services on the route from September to December 2020 due to insufficient staffing caused by the need to train for new rolling stock and new recruits. During this period there will be no trains at Rose Hill Marple, Woodley, Hyde Central Hyde North, and Fairfield stations. As a result frequency will also be cut at Romiley, Guide Bridge and Ashburys. The campaign to stop these plans also involves the Goyt Valley Rail Users Association and is supported by local MPs and Councillors. 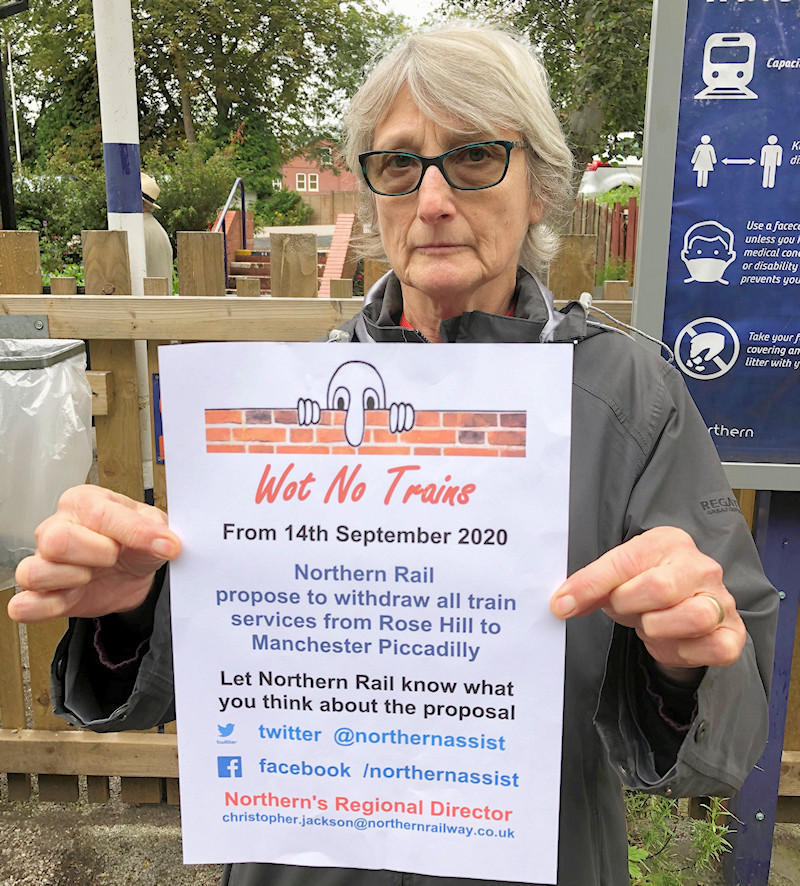 Rachel Singer, above, Chair of the Friends of Rose Hill Station, said:

The withdrawal of service is not just inconvenient, it will cause distress and a severe sense of dislocation and disruption to life for many who use the service when we are all struggling to re-establish some routines as lockdown eases. We are also concerned about the many local school pupils who will not be able to use the service just as they return to school at the start the new session. Many of those affected will switch to travelling by car, causing more pollution and congestion. Others will be forced to use less convenient bus and rail services, increasing the pressure on these services and making social distancing harder. Some people will decide not to travel at all, undermining the government’s efforts to get the economy growing again. 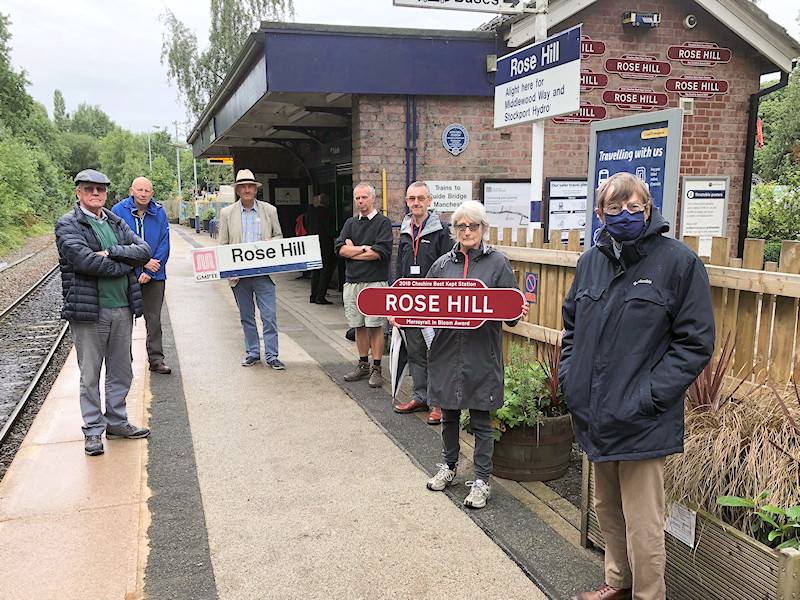 Northern are asking passengers to find other ways to travel, pointing them to local bus services, and to rail stations on the routes from Glossop and from Sheffield via Marple. But this comes when bus services are being reduced, and passengers are already being asked to try to avoid the rail route from Sheffield via Marple due to overcrowding. With capacity on alternative routes being limited due to social distancing, overcrowding may force passengers to find another means of transport, or make it impossible to maintain social distancing.

The longer this closure goes on, the harder it will be to persuade passengers to come back to rail, working against the aim of making our transport system more sustainable. This also undermines the government’s commitment to rebuild passenger confidence when it took over the running of services across the Northern rail network in March.

The user groups point out that several thousand people have signed petitions against Northern’s plans in less than a week and they have created a storm of opposition on social media. The two groups are committed to fighting the plans until they are scrapped.

For more information email This email address is being protected from spambots. You need JavaScript enabled to view it. or follow @forhs142 or @FoMarpleStation on Twitter.

Local politicians are supporting the campaign too

Lisa Smart and the local Liberal Democrat Councillors have set-up an online petition and are saying:

This closure is a huge blow to many, including commuters hoping to get back to work in a safe way and pupils who need to get to school for the new term in September.

Local MP William Wragg has set-up an online petition too and also says:

I’m delighted to have joined forces with neighbouring constituency MPs Andrew Gwynne (Labour, Denton and Reddish) and Jonathan Reynolds (Labour, Stalybridge and Hyde) to keep trains running on the Manchester Piccadilly-Rose Hill via Hyde line. We have put our party politics to one side as we create a united front to tell Northern Trains that these plans are unacceptable. We must keep trains from Rose Hill Marple calling at Romiley and Woodley in our area.

The 3 MPs have sent a joint letter to Northern Trains.