The story of Marple's World War I Timeline

In August 2014 Friends of Marple Memorial Park began what they have called “Marple's WWI Timeline” on the railings of Hollins House in the park. The group's objective was to commemorate the Centenary of the First World War and to highlight the impact it had on a small town like Marple.

A few different ways of doing this were considered before settling on a simple idea, which was to display an A5 card about each man listed on the War Memorial in the park on the 100th anniversary of his death. The cards would feature a photo if available, plus a short narrative giving a brief insight into the life of each man – where they lived and worked, family details and stories, and the circumstances of their deaths. This was possible thanks to the extensive research done by the authors of the book “Remembered, Marple Men who fell in The Great War”, published in 1999. 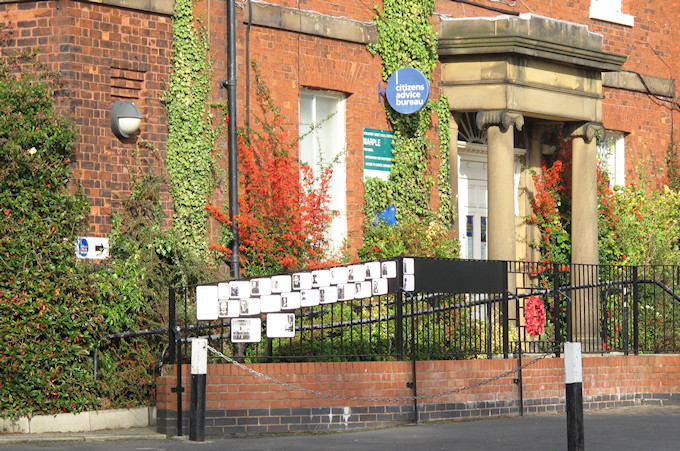 The Timeline just over one year after it began, in October 2015

It was calculated that the railings would be completely filled with cards by the time every man had been added to the timeline and the display has expanded in “real time” over the last four years until all 141 men were included for Remembrance 2018, commemorating 100 years since the end of the war. Adding the cards on the anniversary of each man's death has helped to conveyed what an incredible impact the war was having on the local community as they were bombarded with such terrible news, although we can really only imagine just how devastating it must have been. Of course families often did not have confirmation of their losses until weeks, months or even a year after the official date of death in the case of those who were lost in battle and never found.

As well as the timeline display in the park, the cards for each man have been published on the Friends of the Park web site, the Marple Website and on social media platforms Facebook and Twitter.

The ebb and flow of cards being added has mirrored the impact of the wider conflict on the whole nation. Sometimes there would be no bad news for a month or two but then the losses of the Somme in 1916 – 11 Marple men killed during the month of July; Passchendaele in 1917 – 6 Marple men killed and 1 man mortally wounded on just the first day: Marple's blackest day of the whole conflict. The losses continued relentlessly though 1918 too, during the German Spring Offensive and the Advance to Victory there was no let up for Marple folk as their young men continued to fall. Even after the Armistice, while the whole country was celebrating the end of the war, some families were receiving news that their fathers, husbands or sons would not be coming home.

The display has been exceptionally well received by the public and it has been rewarding for the Friends Group to receive so much positive feedback about it. As well as being read by many individual visitors to the park, we know that local schools have used it for educational purposes and have organised visits by pupils and teachers at Remembrance time during the last few years.

The display also inspired the Marple Poppy Appeal Team to put up 46 Street Poppies in 2017 – one for each man killed during 1917. This was so well supported by the public that the team were encouraged to do it for all 198 local men from Marple, Marple Bridge, Mellor, Compstall and High Lane in 2018. Stockport Council, having seen the success of the scheme in Marple in 2017, have even promoted the idea to all the other districts centres in Stockport for 2018. Driving across Stockport you will see that many of them have taken it up too but we think Marple is still the only area to have individual names and dates on each of the Street Poppies. 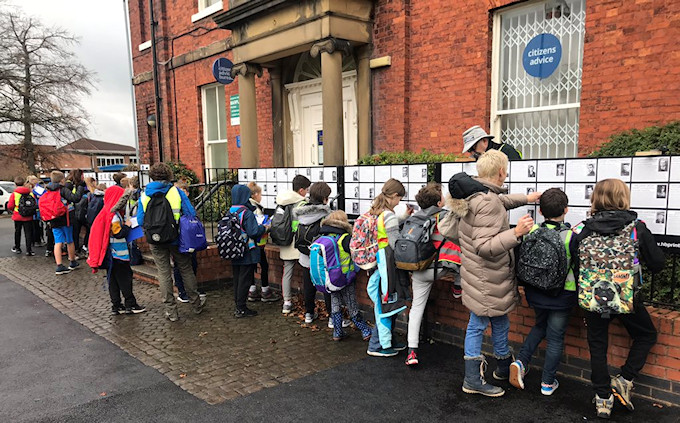 School children seek answers for their "Who Was I?" cards on 1 November 2018

In another inspired link-up with the timeline, the Marple Poppy Appeal Team has also launched a scheme called “Who Was I?” in 2018. This involves the distribution of small cards, each with the name of one of Marple's fallen, that encourage people to use the display in the park to find answers to questions about the local men whose lives were lost. It was great to see dozens of local school children using these cards at the timeline on the day that the final panel was installed.

The display was originally created using temporary materials and expected to be removed. It survived the weather remarkably well and has never been vandalised but the early sections were deteriorating after more than 3 years of exposure to the elements. The thought of eventually having to remove what had become such a popular and thought-provoking feature from the park made the Friends Group realise that something would have to be done to prevent this from happening.

In late 2017 the Group began investigating ways to turn the temporary display into a permanent feature. Different display systems and their costs were investigated and it turned out that one of the most economic options was to use vinyl printing on di-bond composite. Luckily, it also turned out that one of the best companies to help with the project was HB Printing based in the Goyt Mill at Hawk Green. They were very competitive on price and very keen to support the project too. 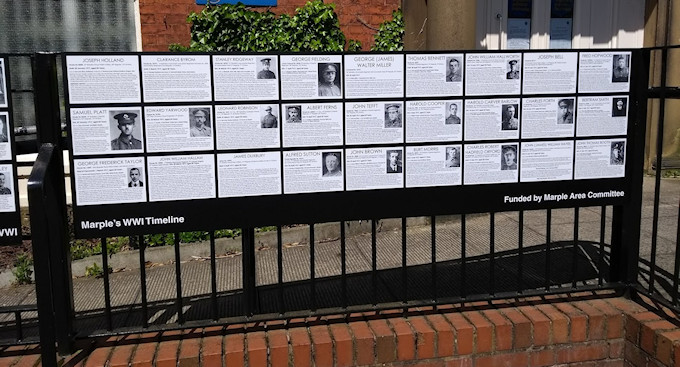 After establishing costs of around £1,000 to create the permanent display panels the Friends of the Park submitted an Area Flexibility Fund Grant application to Marple Area Committee for this sum in February 2018. The award was approved by the committee at their meeting on 7th March, paving the way for Friends of the Park and HB Printing to proceed with the project to plan.

The first permanent panel was installed on 4 May 2018, replacing the oldest part of the temporary display. This went without a hitch and the next 3 panels were installed on 17 May, almost catching us up with the latest temporary cards, which were still being added individually on the anniversaries of each man's death. The 5th and penultimate panel was installed on 7 June, leaving us with the final temporary panel to build up progressively between 8 July and 1 November, when the last man killed before the end of the war was due to be added. There were 8 Marple men who died after the war ended on 11 November 1918. Cards for these men were included on the final panel installed on 1 November 2018. This is so that every man's sacrifice was acknowledged for Remembrance 100 years after the conflict was over. These 8 men will continue to be announced on-line on the 100th anniversaries of their deaths, until the last man's anniversary on 23 November 2019.

The finished Timeline being prepared for Remembrance 2018

A new panel giving a summary of the project and acknowledging information sources is currently in production and is due to be installed next week. The acknowledgements are repeated here:

Thank you to Marple Area Committee and HB Printing Ltd.

People wishing to find out more about any individual on the timeline can use the following sources:

The Book: “REMEMBERED – Marple Men who fell in The Great War” by P Clarke, A Cook and J Bintliff. This book and the research behind it carried out by the authors is a key source for this display and it would not have been possible without their efforts. Unfortunately the book is out of print but there are reference copies available at Marple Library.

Please respect the display, and the men who gave their lives for our futures.