This article appeared in the Stockport Heritage Magazine of summer 1991. It explains how the stone bridge was demolished during the erection of the bailey bridge in Brabyns Park.

Permission has been given by Steve Cliffe, Stockport Heritage Magazine's Editor and Publisher, to reproduce this article here.

A TOTAL ACCIDENT was responsible for removing a Grade II listed bridge, which was a favourite with walkers in Brabyns Park, Marple until Council contractors dismantled it.

“The stones have been stored and it’s our intention to rebuild it on site.” Leisure Services assistant director, Ian Roberts, told the Heritage Magazine. The Bridge, with a date stone of 1804 or 05, was over a drainage ditch, once intended as a mill race leading to a mill lodge. The mill was never built, and the ornamental stone bridge, in classical style with scrollwork end pieces, continued as part of the carriage drive from Brabyns Hall to Compstall, via the iron bridge over the Goyt.

It was because the iron bridge, also a grade II listed structure, built in 1813, had been closed, that contractors damaged the stone bridge getting heavy cranes and trucks to it. Witnesses said workmen, “scurried about”, numbering the stones as the bridge was demolished, denying that it was listed, when challenged by members of the public. They erected a bailey bridge over the iron bridge nearby, to allow pedestrian access for the first time in months.

The stone bridge gap was filled with cinders and the drainage culverted through pipes. The council are seeking compensation from the contractors, and conservation officer, John Davies, has had to write to the Director of Leisure Services asking for a retrospective listed building consent application and demanding  that the structure be re-instated. Otherwise, Stockport Council would be in the unique position of having to prosecute themselves.

Meanwhile, a feasibility study is being carried out on the costs of repairing the iron bridge – thought to be in excess of Ł100,000. It was fabricated by the Salford Ironworks for a mill owner called Wright, who owned Brabyns Hall and Park early in the 19th C.  It has hemispherical stone copings and three cast iron arches which are suffering from corrosion. Floods washed away part of the banking, and a dangerous tree loosened the piles last year, leading to closure.

It is described as an important horse and footpath route by David Bryant of the Etherow Goyt Valley Joint Committee. Both bridges are described of interest by John Davies, who insists that the stone bridge will be restored, “stone by stone”. The ivy-covered parapet, in the shade of large trees, was a favourite spot for walkers to have a rest. 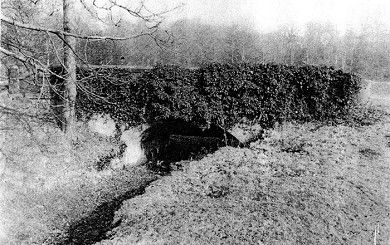 Gone but not forgotten... workmen dismantled the ivy covered bridge after a crane struck the parapet. DoE copyright

Thanks to a prolonged campaign by Marple Civic Society the Scroll Bridge was rebuilt in 2007. There are some photos taken while the work was being done on the Virtual History Tour.