This is a walk down into Marple Dale and alongside the River Goyt, with an opportunity for refreshments half way round. On the way back you will pass the site of Marple Hall, the former home of the Bradshaw family.

The walk is based on the original leaflet produced by the late Gordon Mills in 1998 and was first published on this site with his permission in the same year. It is the second of Gordon's walks to be updated in partnership with Marple Local History Society as part of a longer term programme to ensure that these historic guides remain available for people to enjoy. The walk has been checked and updated by David Burridge, an active member of the society, and the revised leaflet is available for exclusive downloaded here: Walks Around Marple No. 1 - Marple Dale.

For a map with satellite and hybrid views of the route, use this link to Google's Pedometer: Walk 1.

The text from the guide is reproduced in default grey and the photos originally used by Gordon in his guide have been supplemented with others from the "Virtual History Tour of Marple & District" and more recent colour photos. Additional text in the on-line version only is coloured green.

Note: following installation of the Sustrans bridge across the River Goyt at Chadkirk in 2012 this walk can easily be linked up with Walk No. 4 - Chadkirk

Walks Around Marple No. 1 - Marple Dale

Unfortunately the footpath near Lower Dale Farm (4) and running alongside the River Goyt is currently closed due to serious erosion.

This is a walk down into Marple Dale and alongside the River Goyt, with an opportunity for refreshments half way round. On the way back we will pass the site of Marple Hall, the former home of the Bradshaw family. [The black and white photos on this page are 80 to 100 years old] 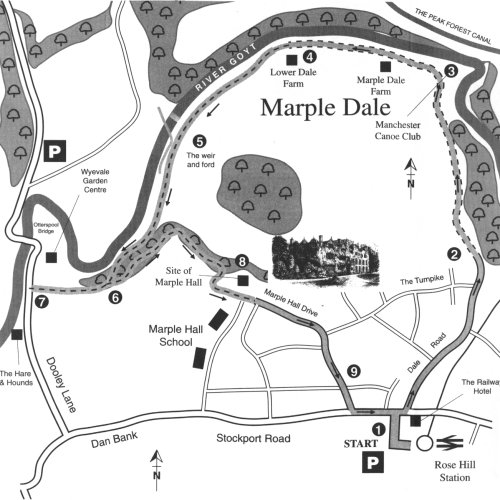 1) After parking at Rose Hill car park we cross Stockport Road at the pelican crossing and make our way down Dale Road.

2) After about 10 minutes walk the road narrows and begins to descend, passing Marple Dale Care Centre on the left. The wide track continues down into the valley and to our right the ground drops away steeply through the trees to the River Goyt.

3) At the bottom of the hill Manchester Canoe Club have a site and the river is marked off with several slalom courses. On the other side of the river high up on the hillside runs the Peak Forest Canal. 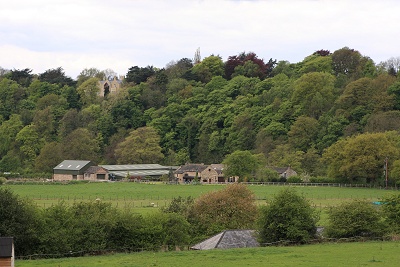 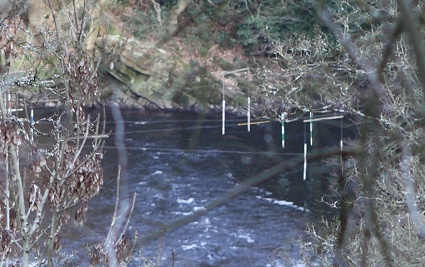 4) At Lower Dale we leave the track and take a footpath to the right of the wall. 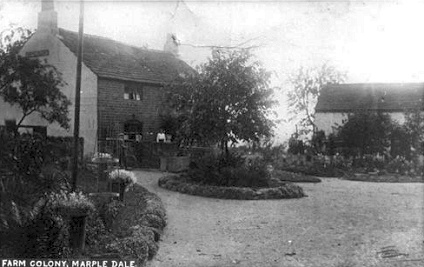 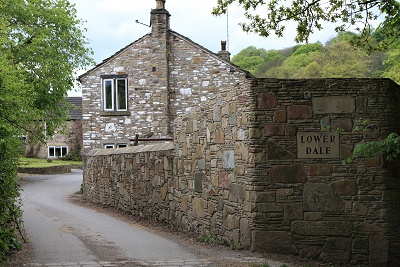 The farm dates back to 1719 but in the 1900s the Y.M.C.A. ran a farm colony here where groups of boys were trained in farming techniques at a time of high unemployment. Many of them eventually went to Canada. 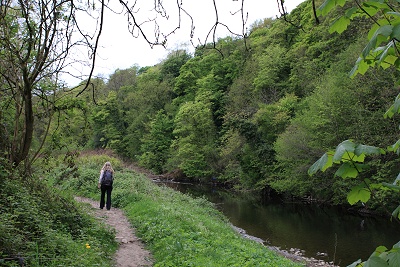 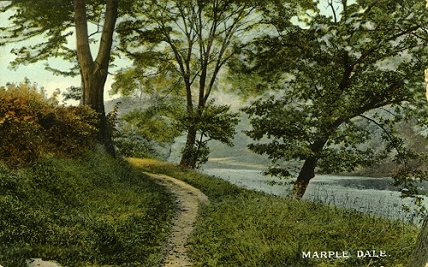 The path follows alongside the river. It can be very muddy after rain and care is needed in places as erosion has brought the river very close to the path. On our left looking across the fields the clump of trees is Turncliff Wood. Beyond, the ground rises very steeply and it was here for over 300 years that Marple Hall held a commanding view over the river valley. 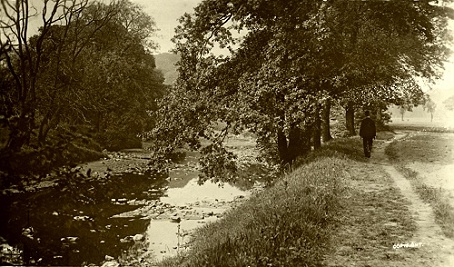 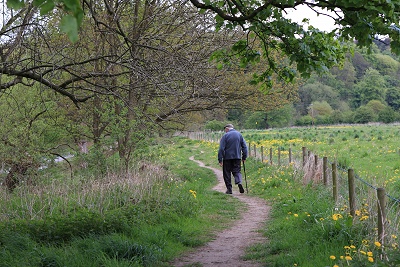 5) Below the weir the ancient ford may be seen. Before the building of Otterspool Bridge this was the route that transport of the day used on its way to Romiley. A new Sustrans Connect2 bridge has been installed above the Marple Dale weir and now provides a great link between Marple and Stockport for pedestrians, cyclists and horse-riders. 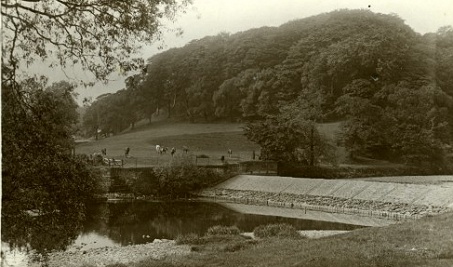 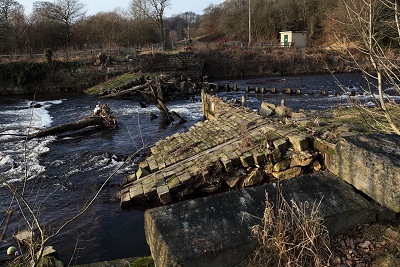 The Weir in better days & Not much left in February 2011

As we enter the woods we cross a fence which has been broken down. Steps now lead the way up the hillside.

6) Joining a path at the top of the hill we can bear right if we wish to take advantage of the nearby refreshment facilities at Marple Garden Centre or the Hare and Hounds public house on Dooley Lane.

7) Dooley Lane was one of the main entrances to Marple Hall many years ago before the present road up Dan Bank was built. 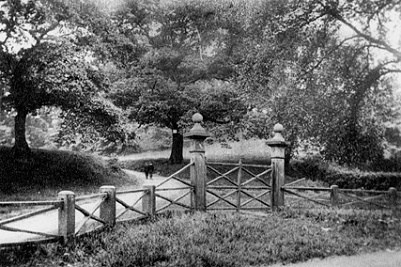 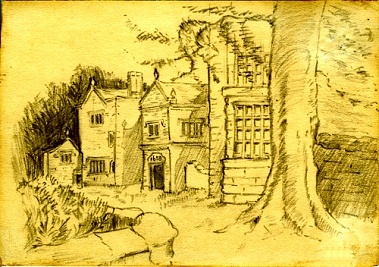 Returning up the hill we make our way past the playing fields of Marple Hall School. Whilst passing the playing fields and getting close to the site of Marple Hall look to the left down into the valley and you may be able to see the site of the old ornamental pond. This has recently refilled with water, either by accident or design. There were once steps running down to this pond from Marple Hall and there was a small building called the Hermitage on the island that can now be seen again. 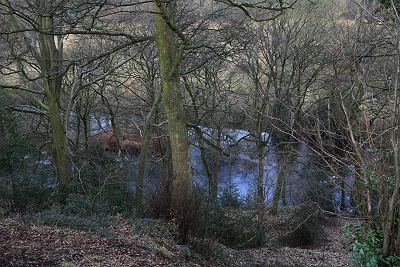 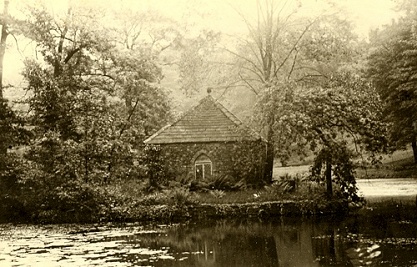 8) A head stone and an area of stones marks the site of the 17th century mansion Marple Hall. This is where the most famous or infamous John Bradshawe lived in 1620. In 1649 John Bradshawe was the President of the High Court of Justice appointed to try King Charles I and his is the first signature on the subsequent death warrant. 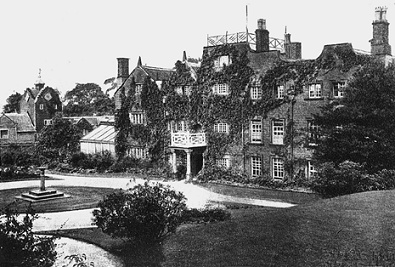 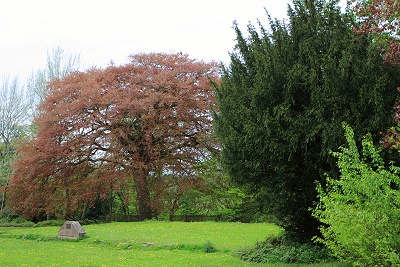 Unfortunately we are unable to enjoy the splendour of this magnificent building because in the 1950s, when it was left unoccupied due to the death of the caretaker, vandals reduced the building to a ruin within a period of less then a year. During this time Marple Council had been offered the hall for £7,000, but it was not within their means to restore and maintain it. The Hall was finally demolished in the late 1950s.

The interior in the 1920s looked like this, with fine pictures and suits of armour lining the walls. 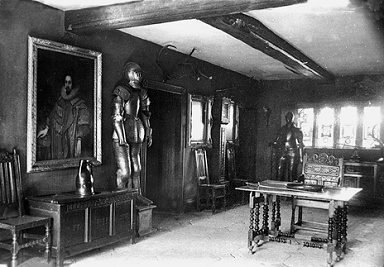 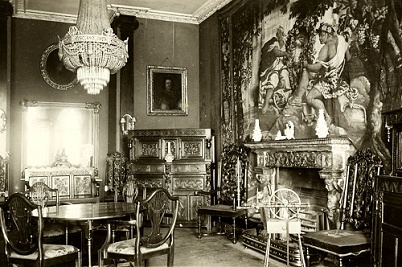 Armour in the Entrance Hall & priceless tapestry in the Dining Room

We continue past the site and onto Marple Hall Drive and make our way towards Stockport Road.

9) From where we are now this is how it looked in the 1930s before any of the present houses were built. 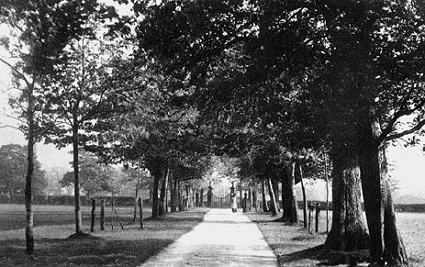 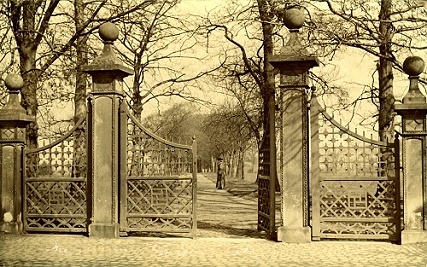 The drive to Marple Hall, now Marple Hall Drive & the gates that were on Stockport Road

On Stockport Road we turn left and make our way back to the car park at Rose Hill. 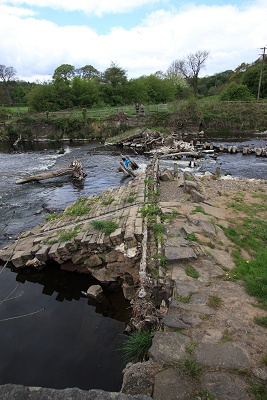 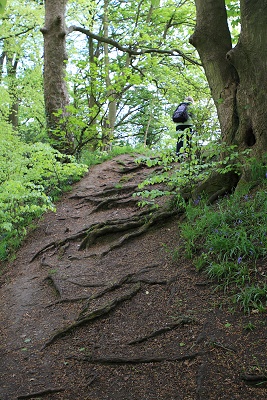 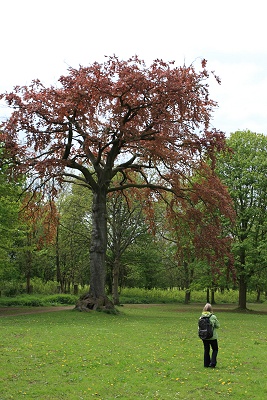 The Weir in 2010, Natural woodland steps & sadly this copper beech is now a stump

This guide was originally designed and produced by Gordon Mills & Co. on behalf of Marple Community Council © 1998. It has been reproduced with permission by The Marple Website and Marple Local History Society and re-published in memory of Gordon Mills 1935 - 2006.