If you go and stand on the Brabyns Brow Bridge and look at Marple Station today, you will see a small, quiet suburban station served by diesel units shuttling every half-hour between Manchester and New Mills. If you are lucky you may see a goods or express passenger train pass through. 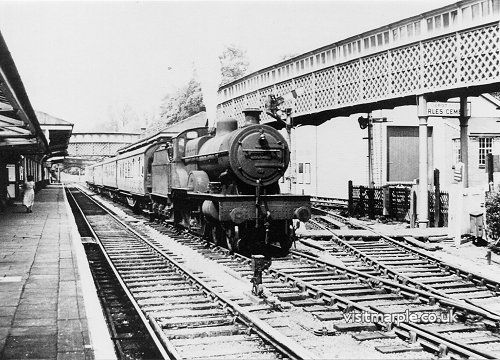 Marple Station in its heyday, looking towards Manchester.

But if you had gone to the same spot in the 1890's, you would have looked down upon a busy main line station at the height of its importance. A large, four platform layout with a substantial range of buildings and a fine array of canopies built to deal with throngs of passengers would confront your eyes. To one side, instead of a car park as now, you would see a small but busy goods yard handling every kind of merchandise. Instead of diesels of uniform appearance, you would be struck by the variety of liveries borne by the locomotives and carriages. For at that time Marple was an important junction on the Midland Railway's route from London to Manchester and Liverpool. For instance if you went to Marple station at about 9.30 am you would see all four platforms occupied by no less than seven trains at once, with destinations ranging from London St. Pancras and Nottingham to Liverpool and Sheffield. At various times you would see dining and sleeping car expresses call, trains being divided for Manchester, Liverpool and Blackburn, and yet others being marshalled up. Going to Manchester you had a choice of trains to three different termini - London Road, Central and Victoria by four different routes. On a typical day well over a hundred trains were booked to call; these trains terminated at 22 different places, ranging from Bristol to Blackburn, Southport to Lowestoft and Leicester to Blackpool, linking Marple directly to well over 100 different stations in 13 counties. Including non-stop expresses and goods trains, about 240 trains had to pass through Marple every 24 hours - or an average of one every six minutes day and night! 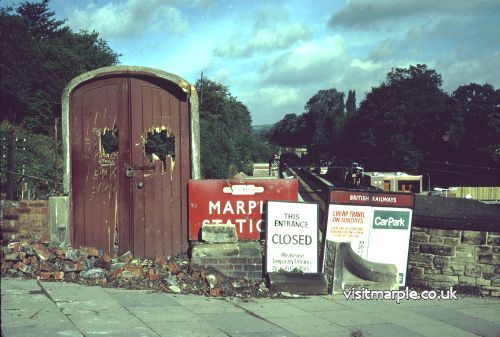 The main entrance to Marple Station in 1970, demolition almost complete.

How did Marple Station come to be such a hive of activity? This book attempts to show how Marple attained such importance, and how it has declined to its present suburban status. The story begins in the last years of the 18th century with the railways' progenitors, the canals, and deals with the early schemes to put Marple on the railway map. Much of the tale is of the cut-throat Victorian railway politics which gave the district its rail network, and of the arrival of the Midland Railway which gave Marple its importance.

But ever since Marple was by-passed by the Midland to give higher speeds to Liverpool and Manchester in 1902, the tale is one of decline with rising road competition. In the "Beeching Era" of the 1960's many lines in the district closed, but in Marple the basic network survived. The 1970's have seen however a reversal of fortunes, and in 1980 our railways seem to have an assured future.

This is a local history, a history of the railways which were built through Marple. a community perched on the edge of the Pennines, once a cotton township, but now largely a pleasant suburb. The area covered centres on Marple Station, but includes the stations at Strines, Rose Hill, High Lane and Middlewood, which serve out-lying parts of the Marple district. But it is a local history painted against the larger background of railway and national politics, and the dramatic social and economic changes of the past 150 years since the opening of the Liverpool and Manchester Railway in 1830 brought the first modern main line railway in the world to the North West.