An Introduction to the Canals & Waterways of Marple 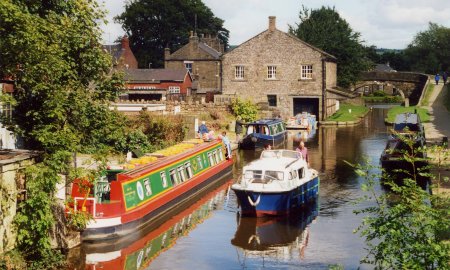 The River Goyt is one of the most beautiful features of the district, a walk along its upstream banks as it runs through the Marple area takes one through woodlands, past weirs and waterfalls and on towards a single span of great age, although not as old as its local name Roman Bridge implies. At this point in the Goyt Valley one can plainly see the largely rural character of the district, the land rising sharply to the moorland of Mellor. The Goyt is also home to the Manchester Canoe Club, who regularly hold slalom competitions and river races there.

Roman Lakes for fishing and boating Near the Roman Bridge are the Marple Lakes, also called Roman, but constructed by Samuel Oldknow in the 1700's to serve his Mellor Mill and now used for fishing and boating. Marple is an important centre of the canal system. It is also the site of the second steepest flight of locks in the country which takes the Peak Forest Canal from its junction with Macclesfield canal down over 200 feet through its 16 locks set in beautiful countryside and which are tended with loving care. For a walk taking in the Marple locks and aqueduct follow this link. 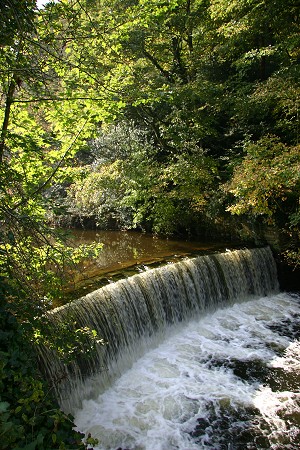 For the walker as well as the boater the journey along the Peak Forest canal from Whaley Bridge takes one through many wooded areas areas with beautiful views over the River Goyt to Kinder Scout, the hills above New Mills and Mellor with its church as a noticeable landmark. Once down the flight of locks, the engineering feat of the aqueduct over the river takes the canal through the more densely wooded area around Romiley following which the countryside becomes more open until it reaches its junction with the Ashton and Huddersfield Narrow canals at Portland Basin in Ashton-Under-Lyne.

The traveller from Marple to Macclesfield will find a contrast to the Peak Forest Canal. The Macclesfield canal contours the open land at over 500 feet with magnificent views over Stockport and Greater Manchester. Weather permitting it is possible to see the Welsh hills, so flat is the Cheshire plain. Whenever land meets water there is an abundance of wild life and the canals are no exception. The traveller can expect to see in the summer plenty of evidence of the nation's most popular sport, angling, as young and old follow their favourite pastime.

Those interested in our industrial heritage will find in Marple many remnants of our past associated with the canals including mills, warehouses, lime kilns and old canal arms. At one time 50 to 60 boats could have been seen each day going about their commercial business. Today the pleasure cruiser has usurped the working boat now that restoration of much of the canal system has taken place. 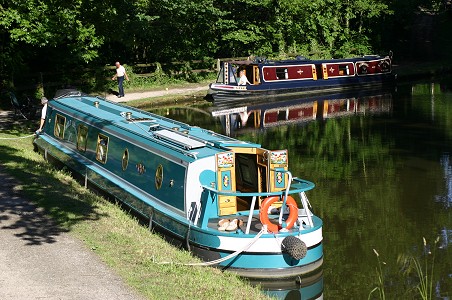 The former Marple Council played a significant part in the restoration of the flight of locks. This work was completed in 1974. The event was commemorated by the placing of a plaque on the old toll house at the top lock and by holding of the National Rally of boats by the Inland Waterways Association in the same year. Subsequently Marple has been the venue of many "gatherings of boats". The restoration of the locks provided the final link in the Cheshire Ring of canals so beloved by those who hire boats for their holidays. In the summer visitors can enjoy the spectacle of boats at the two marinas, or as they pass through the locks on their journeys.

Marple has seen two Royal visits associated with the canals. The Queen in 1968 visited Possett Bridge near Memorial Park to see the restoration work on the towpath. This was also the scene of the visit in 1981 by the Prince of Wales to commission the narrow boat New Horizons which is run by a charitable trust to provide cruising holidays for handicapped and disabled people. New Horizons carries more than 1000 disabled people and their helpers some 1500 miles each year over the canal system.