With the biggest challenge for Friends of Marple Memorial Park and myself ongoing with the Marple Skatepark Development Project, I was pleased that The Marple Website was able to donate another £1,000 towards this project from the banner advertising income on the main site, the forum and the Virtual Tour in 2014.

This follows on from the donation of £500 last year (which was match-funded by Forever Manchester) and £1,000 as the main sponsor of the Marple Christmas Cracker in 2012. It also continues the contributions made each year by The Marple Website to local causes that began in 2006 with the Iron Bridge Project and has now reached a grand total of £8,200. There can't be many other community web sites doing this!

For the last four years the donations to local causes have only been possible thanks to the support of the local businesses that have taken up the opportunity to advertise on the site, so a very big thank you to them - click here to see who they are.

A banner advert is a great way to promote your business and support your local community web site at the same time. There's also a sponsors' area of the forum that advertisers can use if they wish. The banners are only available to local Stockport based organisations and businesses and there are discounts for MBF members too. So if you're interested in promoting your business on the site have a look here, and get in touch.

With over 1,000 photos added over the last 12 months, the total number of images on the Virtual Tour has now reached 9,738 and they've been viewed an amazing 427,738 times since Christmas 2013. Earlier in the year the last folder from Marple Local History Society's photo archive was scanned and uploaded. I thought it could be a struggle to continue adding new images at the same rate but I needn't have worried; the Society has recently delivered more than 20 new folders for me to work my way through!

On the strength of this and the fantastic modern day contributions from prolific local photographer Arthur Procter, we should easily pass 10,000 images early in the New Year and hopefully get close to 3,000,000 image views by Christmas 2015.

Helping to keep Marple Memorial Park at its best!

As I hope most people will know, The Marple Website is strongly linked with Friends of Marple Memorial Park and in this centenary year since the start of the First World War, and over the next four years, it's particularly important that the history and heritage of the park and the reason it  came into being are understood by the local community. 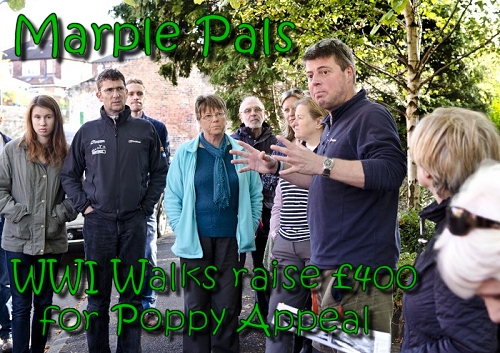 So as well as our normal projects to keep the park looking tidy and maintaining flowerbeds and benches we've undertaken a number of other projects that are linked to the WWI centenaries. These have included the planting of a red rose hedge around the War Memorial beds and by the Danny Winter bench, a series of six guided walks led by Andy Cook, battlefield tour guide and co-author of "Remembered", and a WWI timeline display project that over the next few years will commemorate in "real time" the lives of the 141 Marple men who were lost during the Great War.

The "Marple Pals" Walks led by Andy were very popular and it was a real eye-opener to discover how many men were killed from such a small area as Marple Town Centre by visiting the houses where they lived and learning about the lives they left behind. It gave a real insight into the impact that the war must have made on our community and hundreds of others like it across the country. With a collection at the end, the walks also raised £400 for the British Legion Poppy Appeal. We hope to organise more of these with Andy in the coming centenary years.

The WWI Timeline Display Project is set to run for the next five years with a card giving personal details about each man being added to the railings in front of Hollins House on the 100th anniversaries of their deaths. The display began in October this year with a card about Fred Atkinson, the first to be killed 100 years ago, and by the time the last man is added in November 2019 it will stretch across the full width of the railings. We hope the display will give a dramatic insight into the community's losses and encourage people to learn more about the men who fell.

We've also been working on an exciting WWI Art Project to remind people entering the park of its origins. We've had marvelous support on this from local and not so local businesses and hope to unveil something really special early in the New Year.

Friends of the Park have been focused on fundraising for Marple Skatepark Development Project for the last few years. There's more about that below but before moving on it's worthy of mention that the group's fundraising total since they began in 2003 has now surpassed £60,000!

As I said last year, Friends of the Park's most ambitious project yet is to upgrade and extend the Skatepark in Marple Memorial Park. We've been working on this since 2011 with Lewis Abbott, one of the skaters who campaigned for the original facility, several other older users of the skatepark, Marple Hall School, Marple Library, SMBC, Marple Civic Society and Marple Vision Partnership.

Over £21,000 has been raised towards the Skatepark Project since we began community fund raising in November 2012. We've had fantastic support from all kinds of individuals, local organisations and businesses, making it a truly community driven project, and we've now passed our initial funding target of £20,000.

Stockport Council has allocated £22,000 of commuted sums and we hope to match this with community funding by the end of the year, taking the local funding available to a total of around £44,000. Overall we need approximately £107,000 (including landfill taxes) to achieve our aims and hope to make an application to a Landfill Trust for the balance of around £63,000 in the New Year.

This year we had a design competition tender and consulted on the designs at Marple Carnival in June. Through the summer we worked with a Skatepark User Group made up of young local people to score the designs and choose the tenderer that we want to work with. We've been waiting since then (now 6 months and it seems like forever) for the council to award a contract to the chosen tenderer so that we can work with them to fine tune the design and to seek planning permission. This is needed before we can apply for the large grant from the Landfill Trust. We've been incredibly frustrated at how long the council are taking to get this done and we hope they'll resolve matters soon to allow us to make some more progress on this aspect of the project.

We also had a major setback with our funding strategy earlier this year when the Landfill trust we planned to apply to changed their boundaries so that were half a mile outside their qualifying zone. Fortunately since then we've found another Trust whose criteria the project does currently meet and hopefully still will when we are ready to apply!

You can read full details of the project on the Friends of the Park web site but here are some highlights of the community funding raised so far, which has grown by almost £10,000 since Christmas last year:

In addition to this we've been doing Christmas collections with Marple & Goyt Valley Rotary again at the Co-Op recently, Marple and District WI were raising funds for the project at Marple's Christmas Cracker and local author K.C. Dowling is donating a share of the profits from the sale of his novel "A Man of Insignificance". We don't know how much these most recent activities have raised yet but we expect to be very close to that £22,000 target by the end of 2014

So all-in-all we're in great shape with our match-funding and the big challenges ahead of us now are to nominate a contractor and work with him to refine the design, obtain planning permission and then make a successful grant application to a suitable funding body. In view of the time things take when you're working with a local council I wouldn't like to promise how much longer this will take but hopefully we'll get there eventually, maybe even in 2015!

Marple Aqueduct is being revealed at last

It's now 14 years since I wrote in the Community News about the Marple Aqueduct's Bicentenary in the year 2000. At the time of writing this piece I said: "It would be perfect if this celebration could be accompanied by improvements to the steps and public footpath leading down from the aqueduct and passing underneath. By clearing some of the trees which almost completely obscure it from view, the scene could be returned to how it must have appeared to George Borrow when he first declared it "a wonder of the age".

It's great to see that following the success of Mellor Archaeological Trust and the Canal and River Trust's "Revealing Oldknow's Legacy" Lottery bid in September 2013, this work is now underway. I hope that they can overcome land ownership issues so that they're able to do justice to this magnificent structure and reveal it properly. There are many other improvements that could be made around this area too, like a footbridge across the base of the viaduct to link up the path through Brabyns Park woods with the footpaths passing under the Aqueduct and Viaduct on the opposite bank and the towpath up above. Maybe it will even be possible to create a new path along the River Goyt linking the Aqueduct to Marple Dale and Chadkirk bridge too. Now wouldn't that be fantastic!

As I always say at this time of year, The Marple Website thrives on its visitors coming back again and again and it's all about the local community making contributions and keeping the site fresh, active and alive. There are many ways that people can do this, including registering in the forum and posting your two-penneth in the variety of topics discussed there, or publicising your organisation's activities in the Events Calendar. Independent contributions and articles on local history, attractions or other matters of interest to the local community are particularly welcome too.

In December 2014 the Forum and Notice Board received a major upgrade and will hopefully continue to be popular with local people. The Virtual Tour has also been upgraded recently, although much less noticeably. Next on the agenda is to upgrade the main site - a daunting task due to the sheer size and number of pages that have been building since 1998. Hopefully 2015 will be the year I manage to tackle that challenge!

I'm very grateful to Howard for help moderating the Forum and especially to Arthur Procter for his tireless efforts to record with his camera everything of note that happens in Marple to share with the community on The Marple Website. Thanks to everyone else who supports the site by keeping on coming back to see what's new - that's the most important thing of all!

Best wishes for a Merry Christmas and a Happy New Year.
Mark Whittaker - The Marple Website

It's become a traditional to give Arthur the last "word" on these Christmas
messages for his fantastic photographic contributions to the site, so here it is for 2014: 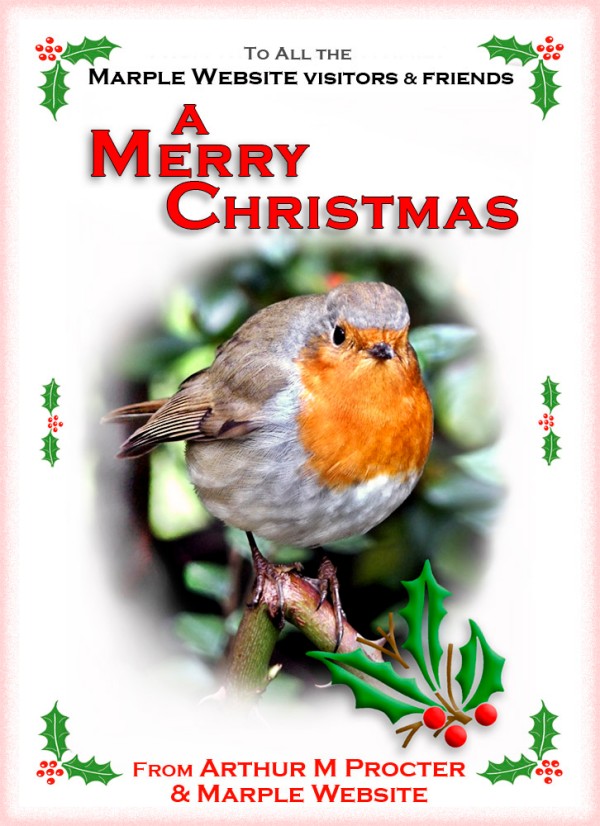