At the end of September we held a BBQ at the home of Mike Coleman.

It was a typical British Summer day – cool at times, warm when the sun did come out and of course it wouldn’t be typical if we hadn’t had showers as well. We were entertained by our President Bob with his ukulele whilst Mike cooked the food on the BBQ. 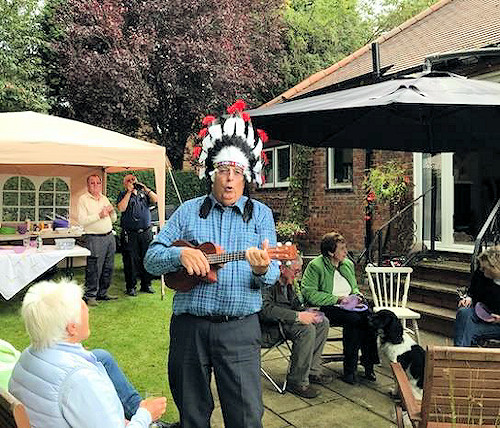 On 12th October, David Slater gave a talk about the works of J.B. Priestley, who as a successful play right and author of many books, had three plays showing in the West End. Many of his books and plays were later made into films.

The 26th October saw the return of Geoff Keeling who gave us more in-depth details about finger prints, blood samples, DNA and other clues to help solve crimes.

The Club is now planning a Youth Public Speaking Competition – and is contacting local schools and youth organisations with a view to them taking part. There are several age group categories and the final will be judged in the New Year.

The Rotary District Conference is being held on 27th to 29th October at Scarborough and several members are attending.

Dates for the future:

On 2nd November the speaker will be a serving Prison Officer from Manchester telling us about Prison Life.

The Dates and Locations for the annual Christmas collections are well under way and the list will be published in local papers in the next few weeks. A list will also be included in the next Rotary Newsletter on this site.