Having survived all the trials and tribulations of 2020, Romiley and Marple Lions were counting their blessings and, as they prepare to tackle whatever 2021 may throw at them, they are still counting! A wonderfully successful Christmas season fundraising with the Dragon Miniature Railway at Dobbies' Garden Centre in Marple has already been celebrated and publicised but was actually just the ending to a strangely successful year for the Club.

Covid 19 brought tragedy and heartbreak into many people's lives but, thanks to a grant received from Lions Clubs International and kind donations made to the Club, the Lions were able to continue their regular support of various worthy causes, whilst also helping to fund the assistance given to local families in need. As the year came to a close, funds were getting dangerously low and Club members feared the worst. It seemed unlikely that the Dragon Miniature Railway's Christmas Grotto would be allowed to open and other means of fundraising would no doubt have been forbidden. However, modifications were made and we now know how successful the Grotto sessions were. 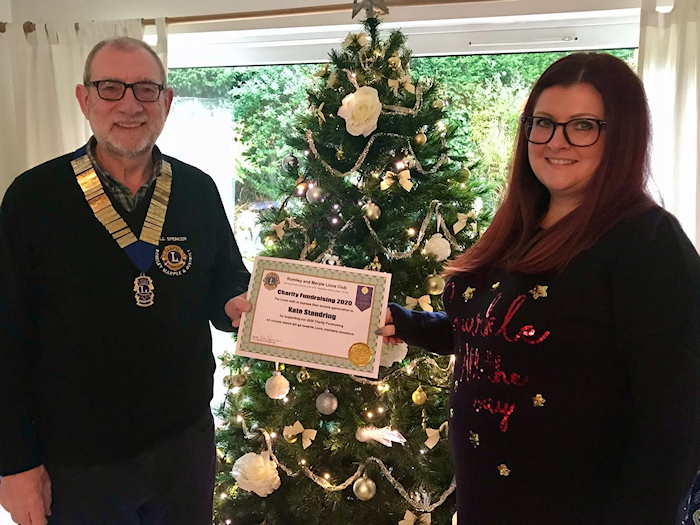 Lions President Bill thanks Kate for her support in the Zip line challenge raising £580 for the Club's Charities.

Whilst the arrangements were being made for Christmas, other things were happening. Lion President Bill Spencer was "persuaded" by his daughter, Kate Standring, to accept a "Zip Line" challenge in North Wales to raise funds for the Club. This, coupled with donations received from the Club's wonderful supporters, meant that 2020 ended on a triumphant note and the Lions can rise to the challenge of 2021 with confidence and enthusiasm.

That confidence and enthusiasm was shown recently when members accepted another challenge and took part in a "Zoom" meeting bravely arranged and hosted by Lion Secretary Phil Daniels. Decisions had to be made and all were in agreement that the following donations should be made: £200 each to St. Ann's Hospice, East Cheshire Hospice, Willow Wood Hospice and Stockport Mind; £100 each to The Cherry Tree Project (Romiley), All Saints Foodbank (Marple) and St. Mark's Foodbank ( Bredbury/Woodley). Obviously, the Club will continue to monitor the situation carefully and provide whatever assistance it can during these trying times. This assistance is only made possible by the Club's loyal supporters (some of whom would not want to be named) - many, many thanks to you all!

A bit of good news (at last) from Romiley and Marple Lions!

Here's some great news received the first week in January from Romiley and Marple Lions:

I hope you managed to salvage something from Christmas and are able to summon up at least a little enthusiasm for 2021. After the last horrendous year, I have been reflecting on some words of wisdom that I seem to recall being passed on by my dear old Grandmother, Florrie Cooke. Firstly, "Old age is a tragedy" - she might have been right(?) - but I think I'll settle for "Count your blessings".

Almost £3,000 raised by Santa's Grotto at the Dragon Railway

2020 is out of the way and the Club is definitely still up and running. As you know, there was no Santa Dash and our Christmas activities looked to be in danger of cancellation. However, the modifications to the Lions/Dragon Miniature Railway Christmas Grotto sessions satisfied both the Local Authority and the Police and we were allowed to continue, albeit for only three weekends instead of five. Thankfully, several weekday sessions were also manned and the Dobbies (Marple) Garden Centre (home of the Railway) was unable to continue with any of its own Father Christmas events (in common with many of our other usual "rivals") so we were extremely popular and busy. Lion President Bill Spencer and his heroic team, Lions Phil Daniels, John Perkins, Mike Evanson and Tony Hope, worked tirelessly to ensure that as many people as possible were able to see Father Christmas. As a result, almost £3,000 was raised - an incredible amount and our best ever. It was a wonderful and unforgettable project in many ways.

The man in the red suit reigned supreme!

As a fundraiser it was obviously very successful but I think it also helped to raise the spirits of many people, adults and children alike, and was a perfect example of what the Lions can do for the community. Many thanks to Brian Lomas and his Railway volunteers. Like the Lions, they were a depleted team (thanks to shielding, self-isolation and the like) and were working under extreme pressure but they kept going and the "Man in the Red Suit" reigned supreme once again. As ever, the Club is grateful to those faithful supporters who come along to visit the Grotto year after year (plus a good few extra this time) and I can assure you that the funds raised will be put to good use. 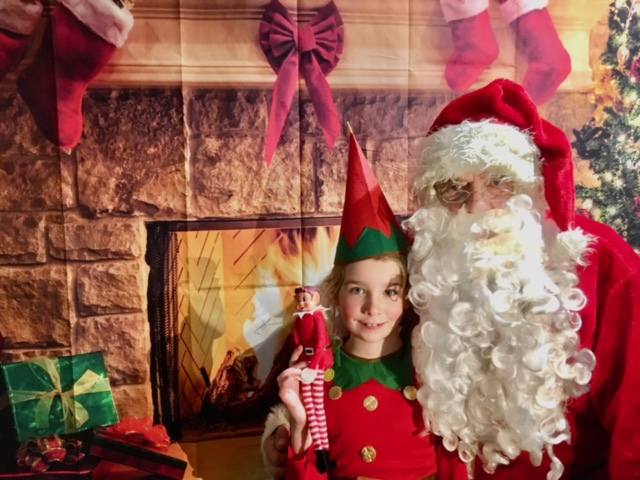 Two regular members of the Lions usual team (Lions George Tavener and Terry Harding) were sadly and unavoidably absent but were liaising with Maddi's Butterflies and Clic Sargent to ensure that some Christmas cheer was brought into the lives of young cancer sufferers as they enjoyed "Zoom" chatting sessions with Father Christmas. This was not a fundraising project but a thoroughly satisfying and fulfilling example of Lions helping those in need.

In the run up to Christmas, the Club was also able to help with donations to two local organisations, Young Caritas (Our Lady and St.Christopher's Church, Romiley) and the Together Trust, that were distributing Christmas packages to needy families in the area.

All in all, a great end to a terrible year.

The Marple Santa Dash organised by Romiley and Marple Lions on behalf of Kidney's for Life has become one of the most popular fixtures in the Marple Christmas calendar and it's with a very sad heart we share the news that it has been postponed. 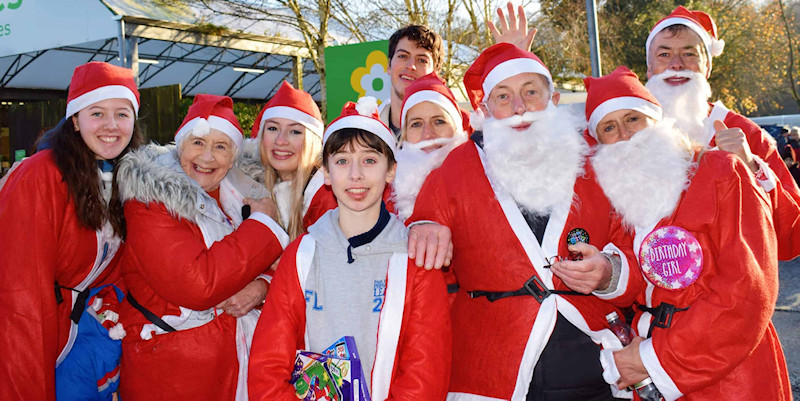 The Lions are refusing to use the word "cancelled" and are determined to hold a delayed event at the earliest practical opportunity. Maybe there will be an Easter Santa Dash next year - let's hope so!

Many thanks to all the people who have given us such wonderful support over many years.

Get involved with Romiley and Marple Lions

To learn more about Romiley and Marple Lions Club visit their entry in the Community Directory..