The following members boarded Cooke's bus at the school gates at 9.15am - with an extra pick-up at Marple Bridge (a fare of 2/- per pupil was paid).

The route chosen was from the Snake Road at the foot of Blackden Clough, up Blackden Clough. This was great fun and new country for us. Met a group of older lads about half way up the Clough and had a chat - this was just above the waterfall. The youngsters enjoyed the climb up the waterfall and the steeper and steeper ascent to the top - Blackden Rind - where we stopped for lunch.

The weather had improved a lot and we had lunch in sunshine, though with many heavy clouds around and a bitter wind blowing away from the shelter of the Clough.

From Blackden Rind we set course on a westerly heading across the peat bogs for Kinder Brook. Had our navigator (Mr FRM) unfolded the map he would no doubt have noticed that the planned route came very close to Seal Edge - however, he failed to do this. When the high rocks on the Seal Edge, above Fairbrook Clough, came in sight we were a bit puzzled. Andrew M was leading at this stage and, on a query from Mr M, said quite confidently that it was the ‘Downfall'. We were puzzled, and even when someone said "Kinder Reservoir is down there", we did not ‘cotton on', and endeavoured to make the landscape fit our mental picture. We imagined that we had come out on the Sandy Heys side of the Downfall. 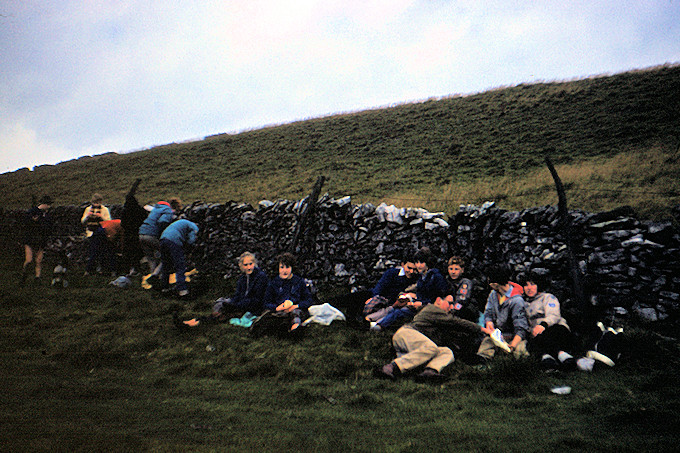 Quite suddenly the truth was realised - Mr M and Andrew felt more than a little foolish in making such a stupid error. However, having pin-pointed our position accurately, we followed the edge path to Fairbrook Head, and then again s/c (set course) across the bogs to Kinder Brook. Until we reached the Kinder Brook we had only seen the group in Blackden Clough, but as we crossed the peat bogs several other groups were seen in the distance.

Erica got stuck in a bog just before we reached the Kinder Brook; it was quite a job getting her unstuck. Unfortunately we did not get a picture of this.

A party on a circular route from Edale passed us - one or two had unsuitable footwear. One young lady was wearing light canvas shoes - they were soaked. This lass professed to being quite comfortable, but not a regular rambler; approach to her was made in the friendliest manner.

We followed the brook to the Downfall, but did not linger long there as the weather had turned cold. Headed along the edge toward Sandy Heys - some of us, after a bit of scrambling on the rocks, dropped down the side among the rocks at the landslide. The remainder, with Mr Booth and Mrs Mason, followed the more usual route to the reservoir and Nab Brow.

Met two young girls wearing rather light clothing and footwear. They had been on a circular route, including the Downfall and had managed this without getting their shoes muddy. Had a little chat with them and advised about footwear.

Allowed a few folk to press on ahead to endeavour to catch 4.13 train - they missed it. Main party arrived in Hayfield at about 4.45pm, just time for a cup of tea. On boarding the train discovered that a few senior girls were missing; they were found when we reached Marple, having been in the front part of the train. The girls apologised nicely for having caused this minor worry - leader was very pleased with the spontaneous way they did this. A very pleasant and successful expedition.