The following members assembled at Marple Station to journey to Edale for a scramble from Edale to Hayfield via Crowden Brook, Redbrook Head, Downfall, Kinder River, Horrible Hill and Nab Brow.

After a stop in the shop at Edale we moved off up the gulley to cross the fields toward the landslide and into the Crowden valley. Mr and Mrs Graves were ahead of us for the first part to the landslide - they were going to Hayfield via Jacobs Ladder with their two girls. We did not overtake them, but from the landslide path could see them heading across the meadows towards Upper Booth.

Followed the path up the Crowden Brook until we reached the rocky part from where we scrambled up the rocks as far as the waterfall where we halted for lunch, sheltered from the cold wind. Again we were suffering from those few over confident people always keen to show the leader the way. Must note a few names and threaten them with the ‘bar'.

After lunch we climbed up the waterfall - many needed help with this. This was surprising as it is not a difficult climb, although there was some snow and ice, which restricted the route up the rocks. After our scramble up the waterfall, the ‘Letter Box' was visited, and here we had much fun scrambling and climbing in and on the mass of rocks. 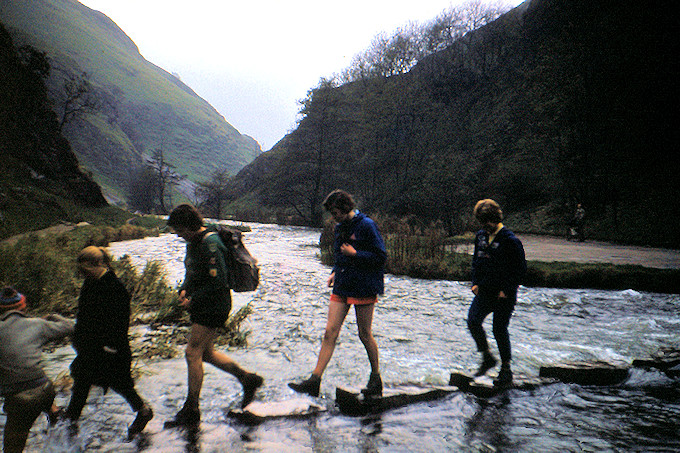 This ‘playtime' lasted about 20 mins before course was set to join Kinder Brook near its source - followed a stream bed for the first quarter mile or so. Before reaching Kinder Brook another school group was observed heading across the plateau in an orderly manner - a diversion was made to say ‘hallo' to this party; a well disciplined, well equipped and well led group from a school at Goole in Yorkshire.

This diversion put us off course somewhat, and we reached the edge of the plateau a couple of hundred yards on the Downfall side of Red Brook. Joining the path we met a few youngsters, belonging to a larger party, some 200yds toward the Downfall. The first boys said they came from St Mary's School, Stretford. Several of our youngsters remarked on the unsuitable footwear and clothing of members of this group; their remarks were embarrassingly correct. Coming up with the main part of the group we found all of them, including the two teachers, unsuitably shod and equipped; light smooth-soled shoes were general, no strong socks or weather-proof coats. On discussion with the teachers it was found that there was no map or compass in the entire group; one teacher said it didn't matter as he knew the route having been over it before - their route was Hayfield, Reservoir, Sandy Heys, Downfall, Edale X, and back to Hayfield. 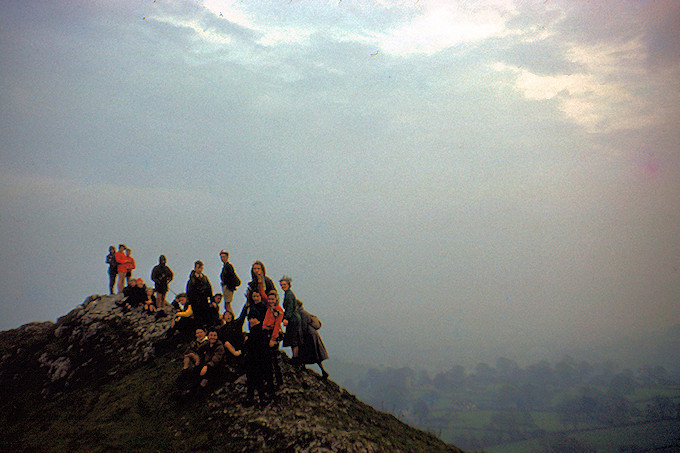 After leaving this group we arrived at the Downfall. Although there was some snow and ice about, we weighed up the situation and, after a recce' by Mr M and Dan McGookin, decided to descend by the ledge. This was exciting; first the majority had to be shepherded thru' the hole - Chris did this - then over the hump to the rocks where Dan was waiting for them. Then Mr M overtook the group - he had been directing at the hump - and showed the way round the narrow ledge. Then we overshot a bit and retraced our step a few yards before descending to the awkward little gully and traverse.

Most of the party found this difficult, and some a little frightening, but with Chris at the top to ‘let them down', and Mr M perched on a ledge to steady them on the traverse, and Dan to receive them, all made it safely. A bit of fun was experienced getting Noel down, but the lad's coming on well. Of course Julie Flunder coped without aid, as did a few of the boys.

When we were all safely down this bit, the descent was continued and we had a stretch of boulder hopping until we reached the more level part of the river. Then on over the fields, up Horrible Hill and so to Hayfield in good time for the 16.45 train.

An excellent days fun and adventure, packed with action and incident. Still have bother from those who want to rush ahead - Chris Gorman, good friend though he is, is also one of the culprits.