The following members assembled at Marple Station for the first ramble of the new school year.

We boarded the 10am train in Marple and arrived at Edale at about 10.40. After a call at the information centre and, of course, at the shop, we moved off across the log bridge and up Grindsbrook.

We made good progress despite several stops for the tail end to catch up - none were very slow, but we did have a few speedsters anxious to show their superiority. Stayed for a short while at the bend before the gorge, and then on again into the narrow steep part.

At the head of the gorge we stopped for lunch - after a litter check we pushed on gently. The snag about Kinder these days, too many paths are forming; it is no longer necessary to navigate all the way across, just follow the path. Fortunately, on this occasion, we managed to lose the path - or else it petered out. Anyhow, we found ourselves on a nice trackless part and headed into some really juicy bogs. The children loved it - simply wallowed in the mud.

Crossing all the groughs, we did get a little off track and came out of the cloud too close to Blackden Head. From here we altered course and, after another enjoyable series of grough hopping, we came to the Kinder River a little on the Downfall side of Kinder Gates. Followed the course of the river as far as the Downfall where we stayed for a while to scramble around on the rocks. 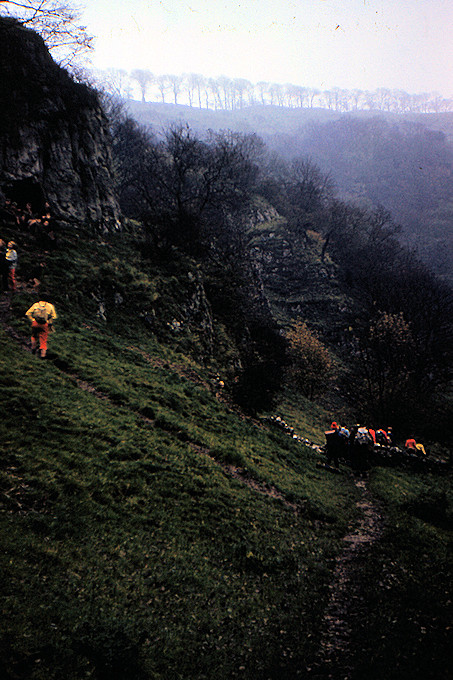 Haven't mentioned that we had proceeded most of the way in rain - sometimes a gentle penetrating drizzle, sometimes quite heavy, but all the time warm and never very uncomfortable.

From the Downfall it had been planned to descend down the rocky route to the river and to follow this to the reservoir but, as the Leygatehead area was out of bounds for the day, we headed along the edge, gradually descending to join the path to Tunstead. This is a pleasant and interesting path, but easy going and good time was made. We did have a little bother with a few folk rushing ahead. Finally leader pushed on quickly, overtook the speeders, and gave them a friendly but firm talking to. This was effective - possibly these self-elected leaders were themselves tiring.

Dropped down through Tunstead and so on to the road and into Hayfield, just in good time to catch the 4.55pm bus. Unfortunately about half the children couldn't resist the temptation to spend money in the sweetshop, and so failed to catch the bus. This necessitated the leader having to watch the bus leave while he waited for the rest of the flock to complete the 200 yds or so from the sweetshop to the bus terminal. However, this was a minor irritating detail, soon forgotten and laughed about.

Everyone voted it a highly successful and enjoyable day; already children are agitating for another ramble, and membership continues to grow. Wardens report has been despatched.