Removal and refitting of the Iron Bridge Bronze Plaque

The Marple Website and Friends of Brabyns Park are pleased to report that Stage 1 of the works to refurbish the Iron Bridge Viewing Platform has been completed. Stage 1 included the installation of new steel lintels and new matching stone work to bridge the gap in the viewing platform left by the removal of the decayed tree stump. The wooden deck on the platform has also been fully renewed. 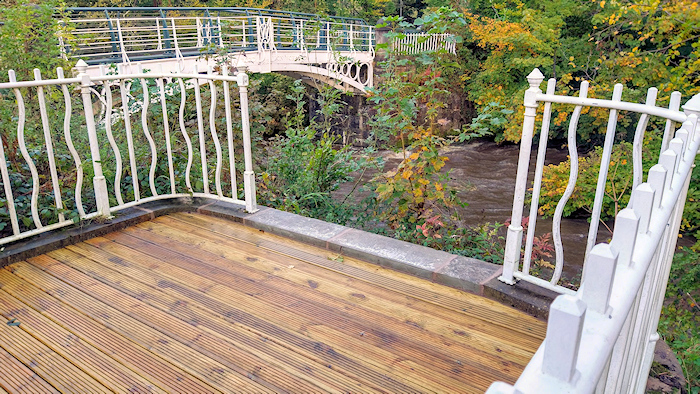 Stage 1 was funded by a £1,000 Flexibility Award from Marple Area Committee, £561 from Friends of Brabyns Park and £100 each from The Marple Website and Marple Civic Society. The council has contributed too - this was to be £900 but they have also absorbed some cost increases too.

We now need to find a further £1,656 of funding for Stage 2. This will include the fabrication and installation of new bespoke matching decorative railings at the back of the platform to bridge the gap left by the removal of the tree stump. The bronze plaque will also be cleaned and refurbished before being remounted on the new railings, returning the viewing platform to full use.

In November 2019 the Friends of Brabyns Park submitted a grant application to the Manchester Airport Fund towards a project to refurbish the Iron Bridge Viewing Platform. It was considered by the fund's trustees in January and they asked the group for further information. This was provided at the end of January but unfortunately the application was refused in late April 2020. We believe, despite our best efforts, we struggled to give the trustees a full understanding of the project aims. 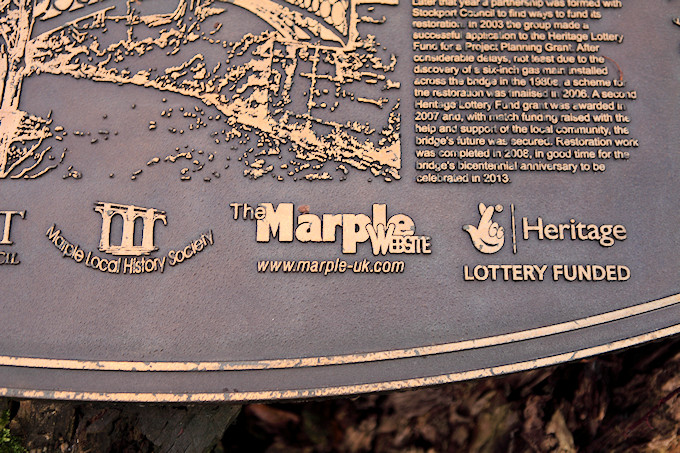 Following this, and in response to the Covid19 outbreak, the project was re-examined and restructured. It was pared down to the key physical works needed to restore the viewing platform only, with plans for walks, talks and reissue of the Discovery Trail put on hold for the time-being. The works were divided into two stages to take advantage of the partial funding already available and in the hope that it would be easier to raise further funds locally. The two stages defined were:

STAGE ONE Making the platform safe and accessible

Fabricate and install a new bespoke matching decorative railing at the back of the platform to bridge the gap between the existing railings left by the removal of the stump.
Clean and refurbish the bronze plaque at the original manufacturers.
Mount the bronze plaque on the new railings and return the viewing platform to full use.

We are pleased to advise that in June 2020 an application to Marple Area Committee for £1,000 of Area Flexibility Funding was successful. Coupled with contributions of £900 from Stockport Council, £561 from Friends of Brabyns Park, and £100 each from The Marple Website and Marple Civic Society, this means that Stage One is now fully funded and can go ahead.

Stockport Council has been requested to place an order for Stage One with their landscape contractor and we are currently waiting to learn when the works will take place.

Once this is underway the next step will be find ways to fund Stage Two and complete the project.

The Friends Group is being supported by The Marple Website in these aims. You can make a donation to this project if you wish via the Friends of Brabyns Park's page in the Community Directory.

As many people will know, the Marple Website was the driving force behind the restoration of the Iron Bridge in Brabyns Park. This lengthy project began in 2001 and was completed in 2008. Those unfamiliar with the story can read more on the old web site: The Iron Bridge Restoration Project.

A late addition to the project was the permanent viewing platform built around the stump of what was once a huge beech tree on the bank near to the bridge. This came about due to the sad demise of that fantastic looking tree, which was estimated to be around 350 years old. Unfortunately it was damaged during a storm over the winter of 2006/7, when a large section of it was blown down. Thankfully it didn't hit the bridge, otherwise the project would have been over before work started.

The storm damage revealed that the whole tree was in a dangerous condition and it was removed for us by local tree surgeon Myers Tree Care. Afterwards we decided to make a feature of the remaining stump - it was carved with wildlife figures for us by tree sculptor Andrew Frost - and the bronze plaque we'd created to explain the story of the bridge was mounted on it. At first a temporary timber viewing platform was built around the stump because we didn't have enough money for the permanent platform and railings we had worked with the council to design. 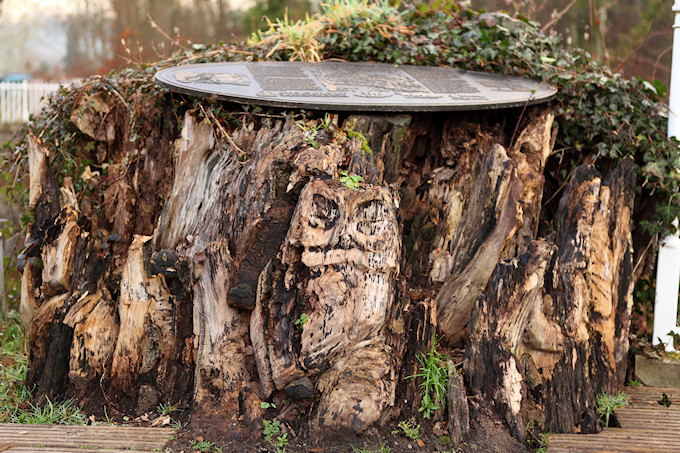 We eventually managed to raise the £16,391 needed for the permanent platform by reallocating some unspent funds from the original project, adding a £2,500 Community Award we had won for our efforts to restore the bridge, plus a contribution of £1,143 from SMBC and £250 from Marple Civic Society.

The viewing platform was finally completed in December 2011 and it looked great. The final touch was completed almost a year later, in October 2012, when the wind-up listening post was installed.

Gradual decay over the years

As with any tree stump that remains in the ground, gradual decay set-in. This was a concern that was considered at the time but we chose to go ahead anyway and were really pleased with the result. However, in the last couple of years the stump has deteriorated badly and in 2018 a dialogue was begun with Friends of Brabyns Park and then the Council about what needs to be done to ensure that the decaying of the stump does not result in the loss of the bronze plaque. 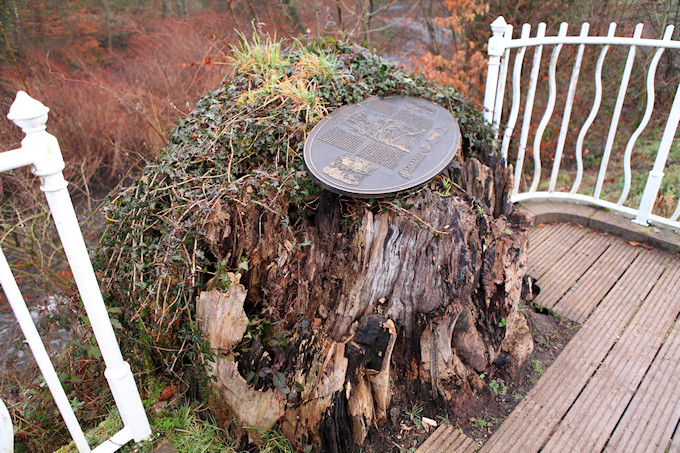 The council removed the plaque in March 2019 and it is now in safe storage at the Brabyns Park depot. In June 2019 the council ground away the remains of the stump for us, which enabled their engineers to specify the ground works needed. This includes the supply and installation of steel lintels to carry new stonework and coping to match original across the gap and to renew the decking.

The other key element of work is to create a new section of railings to span the area between the existing railings, where the stump used to be. This new section of railings will also include brackets for the mounting of the bronze plaque. The railings will be a bespoke mild steel galvanised (and painted white) fabrication that will be made for us by local Metal Artist Wayne Chaisty. Wayne has worked on a number of other projects with the Marple Website and Friends of Memorial Park including the Coronation Bench in the Park, the Jubilee Sculpture in front of the library and the Lock Gates on Oldknow Gardens (known as Lock 17). Wayne also created the Nativity Sculptures that appear on Market Street each Christmas, so his work is well know to most people in the town.

In July 2019 there was a visit to the site and to see the plaque in storage with Wayne, and with Jackie Collins from Friends of Brabyns Park. Wayne was able to confirm the provisional price he had already given to supply and install the railings once the ground works are completed.

Funding for Stage One was secured in June 2020.

Check out the top of this page for the very latest news!